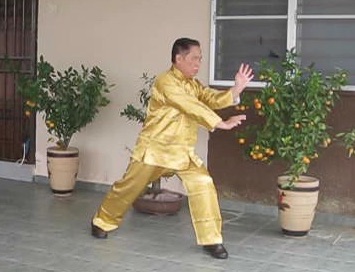 "Tiger Leans on Wooden Door" of Essence of Shaolin

Sitaigung, you have said that the Wudang Taijiquan is the climax of Shaolin kungfu development, Essence of Shaolin is the essence of Shaolin Kungfu and by extension all martial arts, and Dragon Strength is your favorite set.

What are your comments on the three legendary sets -- Wudang Taijiquan, Eessence of Shaolin, Dragon Strength?

All these three sets -- Wudang Taijiquan, Essence of Shaolin and Dragon Strength -- are great sets. To me they are the greatest of all martial art sets.

Wudang Taijiquan is the oldest of the three sets, probably practiced by Zhang San Feng in the Song Dynasty. Dragon Strength is the next, in the Ming Dynasty, and Essence of Shaolin is the latest, in the Qing Dynasty.

It is interesting to note that the word "Taijiquan" was a later invention in the Qing Dynasty. At the time of Zhang San Feng in the Song Dynasty, Wudang Taijiquan was called Wudang Shaolin Kungfu, to differentiate from the Henan Shaolin Kungfu at the Shaolin Monastery.

Zhang San Feng was a genius. He incorporated kungfu, chi kung (or neigong) and meditation into one unity. Wudang Taijiquan, or Wudang Shaolin Kungfu as it was known at that time, was the climax of Shaolin kungfu development.

The combat application of Wudang Taijiquan is very sophisticated. I am sure not many people would know how to apply the patterns in Wudang Taijiquan for combat. How would you apply, for example, "Light Breeze through Sleeves" or "Dark Dragon Wraps Body"?

The combat application of Essence of Shaolin is also sophisticated, but many patterns are simple looking but used in a marvelous way. That is the reason why the patterns are selected for the set, i.e. their marvelous application.

The full name of the Dragon Strength set is "Dragon Strength Chi Circulation Set". There are two main skills in this set -- dragon strength or dragon force, and circulation of chi or energy. Chi is circulated in such a way that dragon force is produced, and can be manifested very fast at any part of the body.

Because we in Shaolin Wahnam have trained different types of internal force, and also because of the way the patterns of the set are arranged to circulate chi, those who attended my Special Dragon Strength Course in December 2014 could use the set to generate a variety of internal force, like Triple Stretch force, Flower Set force, Iron Wire force, Siu Lin Tou force and Taijiquan force.

It is indeed ridiculous that all these three sets, and all the ultimate arts are found in our school. Other people may be angry at this statement or call us liars, probably behind our back. It is great that we have video recording to justify our claim.

The above is taken from Question 8 July 2018 Part 2 of the Selection of Questions and Answers.