SATORI -- A GLIMPSE OF COSMIC REALITY 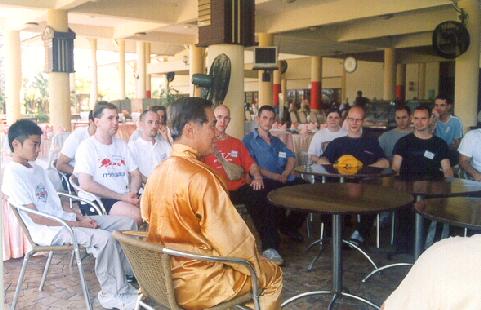 A discussion during an Intensive Shaolin Kungfu Course

I have just arrived back in the UK after attending your Intensive KungFu Course. First of all I just thank you sincerely for all the teachings and guidance that you have given to my Wahnam brothers and me during the course. My only desire now back in the UK, despite the freezing weather, is to get outside and practice, practice, practice. May I also say what a beautiful country you have, with wonderful people and some of the best food I've ever had. It is even possible, after a few days, to get use to the very humid weather.

I do have one question and I would be grateful for your opinions on my experience. I think it was on the second day, the last chi flow of the morning session. My mind had emptied and I was in what I consider to be a chi kung state of mind. All my negative thoughts, bad feeling and dislikes had gone and my mind was still.

It was then (with us still in chi flow) that you asked us all to bless someone. It was at this point that I realized that as well as my hates and dislikes disappearing, all my love and compassion had also gone. The people around me could have been crowned king or slaughtered and I would not have cared either way! My once peaceful chi kung state of mind was suddenly replaced by a empty void which, if I had cared more for it, would have brought me to tears. It is very hard to describe the exact feeling and I don't normally like talking about chi kung experiences, but this one had such an effect that I took a good few hours to recover from it, and it still haunts me occasionally.

It opened up so many questions but I guess the main one is if everything is really just energy then what room is there for love, other emotions and even karma? Because where my mind went to, there was nothing, not even, and don't worry I'm not suicidal, a reason to live.

Your thoughts on this would be very much appreciated. Thanks once again for the course and sharing the Shaolin arts with us.

That Intensive Shaolin Kungfu Course (23rd to 29th November 2004), with the largest number (31) of participants so far, was fantastic. As Markus Kahila has aptly mentioned in the Shaolin Wahnam Discussion Forum, I pushed everyone to his limits — so that everyone would emerge from the course a better person in every aspect. A few participants, at some stages of the course, were pushed so far to their mental limit that they could not tell their front leg from their back!

Yours was even more profound. You went beyond your spiritual limit! But take note that my use of the terms “mental” and “spiritual” here follows Western nomenclature, whereby a person's dimensions are classified into physical, emotional, mental and spiritual. In Chinese terms, a person's dimensions are classified only into two parts, namely “shen” and “xin”, or “body” and “heart”. “Heart” here includes the emotional, mental and spiritual.

What you attained at the course was a very high level satori, or spiritual awakening. You were awakened to the cosmic fact that at a very high spiritual level, there are no forms, no emotions, no thoughts and no souls! It is just the Great Void, just Emptiness. In Western terms, it is just God.

What you experienced was what the great Bodhidharma meant when he told Emperor Liang Wu Ti that there is no holiness, just emptiness, as the Emperor asked our First Patriarch what the first principle of holiness was.

It was also what the Buddha meant when, as recorded in the Heart Sutra, he explained that as the Great Bodhisattva Guan Yin attained Enlightenment, the great Bodhisattva discovered that there is “no eye, ear, nose, tongue, body, will; no form, sound, smell, taste, touch, sub-atomic particles.”

Congratulations. Yours was a great attainment.

At that very high spiritual state, not only your hates and dislikes had disappeared, even your love and compassion had also gone. It was because at that state there are no emotions.

Most people may find this state disturbing or frightening. This is so because they are limited by their intellectualization, and they operate in the phenomenal realm.

Those who experience such a state directly will not have any fear, because there are no emotions. Instead, speaking provisionally, there is only tremendous joy, eternal peace and limitless freedom. There is also no “life” (as mere mortals understand the term) because there is no differentiation into individual persons or souls.

But you feel “fear”, “confidence”, “hatred”, “love”, “cruelty” and “compassion”. You are not one with them. These feelings or cravings cause karma, which sets countless processes of transformation into the phenomenal world.

If there were emotions, which would lead to craving, you would be propelled out of this very high level of transcendental cosmic reality back into the phenomenal world. If there were individual persons or souls, then cosmic reality would not be undifferentiated. In Western terms, God would not be omnipresent, because those individual persons or souls would be outside God.

Yes, everything is just an undifferentiated spread of energy, or of consciousness or mind or spirit. In Western terms, it is just God, the infinite, the eternal and the omnipresent. There is no room for love, other emotions and even karma in cosmic reality. Love, other emotions and karma only operate in the phenomenal realm. Indeed, it is precisely because of love and compassion that Bodhisattvas voluntarily delay entering Buddhahood, or come out of Buddhahood into the human or other worlds to help others.

In your case, during those priceless moments when you had a glimpse of cosmic reality, you went beyond karma, and transcended life and death. Then you came back to our phenomenal world, as you still live and work in this phenomenal world, where karma and rebirth operate. This is a manifestation of what Mahayana masters refer to as “nirvana is samsara, samsara is nirvana.”

It is significant that you attained such a high level satori during a Shaolin Kungfu course, and not during chi kung or formal Zen training. This exemplifies the fact that genuine, traditional Shaolin Kungfu, besides being very effective for combat and health, is meant for spiritual cultivation.

What should you do after such a fantastic attainment, which will surely give meaning and profundity to your life? Just carry on and enjoy your practice.