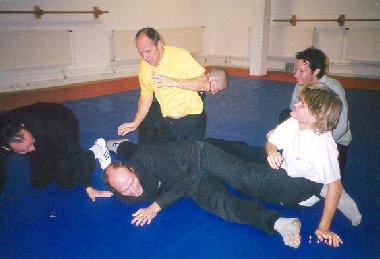 In an impromptu demonstration seemingly with no effort, Kai Uwe, Chief Shaolin Wahnam Instructor of Germany, used his internal force to fell four martial artists who tried to pin him down.

What benefits you can find in Shaolin Kungfu that cannot be found in other martial arts?

An excellent answer was supplied by Kai (Sifu Kai Uwe Jettkandt, Chief Instructor of Shaolin Wahnam Germany), who was already a world known martial art master and an international all-style free sparring champion before he learned from me.

Kai told many Shaolin Wahnam members that he practiced Shaolin Kungfu because it fulfilled to a very high-level all the three attainments he looked for in any martial art -- good health, combat efficiency and spiritual cultivation. Kai explained that many martial arts were good for fighting but bad for health. Some martial arts were good for health, but not effective for combat and lacked spiritual cultivation. Shaolin Kungfu has all these attainments to a very high level.

One can have these three attainments irrespective of his age. In many other martial arts, as a person ages, his health and combat efficiency are affected. But in Shaolin Kungfu, a practitioner actually becomes healthier and more combat efficient.

Many Shaolin Wahnam members told me that they were healthier and fitter at 50 than they were at 30. In many other martial arts, as a person becomes older, his strength and stamina become weaker, and therefore his combat ability is less efficient. But due to internal force which is independent of age, size and gender, and which also contributes much to his health, vitality and longevity, he becomes more combat efficient as he grows older.

Shaolin Kungfu is extremely rich in philosophy, which records the essence of centuries of past masters. Not only the combat tactics and strategies enable present Shaolin practitioners to be more combat efficient, its philosophy enriches their daily life.

Not many people may realize that Shaolin Kungfu and Taijiquan are the only two martial arts that originated from spiritual cultivation. All other martial arts gear towards fighting. Bodhidharma, the first patriarch of the Shaolin arts, and Zhang San Feng, the first patriarch of Taijiquan, practiced their arts to attain Zen or Tao, which in Western language means return to God the Holy Spirit.

Reproduced from Question 8 in Selection of Questions and Answers — December 2016 Part 1.