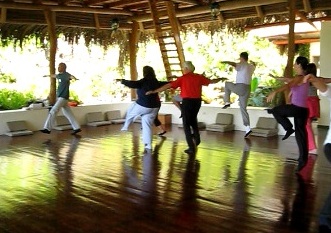 Crane Flying through Clouds, manifesting the yin-yang harmony of solidness and agility

In the context of a person being solid and not moving fast, these two aspects are obvious, and are represented by yang. Hence, we refer to his setback as a weakness of double yang.

Now someone actually attacks you, and you move fast despite originally you were at a solid stance. So now both your solidness and agility are obvious. Do we still call this yin-yang harmony, or the strength of double yang?

We call it yin-yang harmony. In this new context, yin and yang do not represent the non-obvious and the obvious; they represent agility and solidness.

Similarly when a person is fast and has no force, we refer to the situation as a weakness of double yang, regardless of whether before or after his lack of force has been acted out. It is because it is common, and therefore obvious, that when people are fast they have little or no force.

If you are fast and also forceful, or you are forceful and also fast, in both cases you have yin-yang harmony.