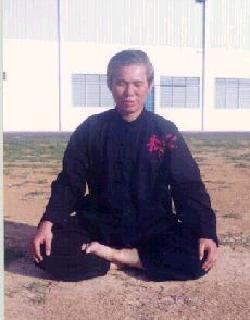 During the last 20 minutes, I was meditating normally, focusing on my breathing, when all of a sudden, I felt my thoughts (which had been with me on and off ) disappear, as though they were water in a sink whose drain had just been unplugged. Very soon afterwards, I felt a powerful, warm sensation growing out of my lower abdomen, and my vision (we were meditating with half-closed eyes) swam slightly. I felt completely aware of the room around me and the sounds around me, and for that moment all thought I had of the past or present were completely gone.

The warm sensation growing from my abdomen felt so strong and so good. I don't think that I've ever felt such a powerful physical pleasant feeling before. Although it was a very warm feeling, I did not sweat, and my body did not move or sag; in fact, all of the aches and pains I had from sitting still seemed to melt away like sugar in water.

Please tell me, Sifu Wong, is this a normal occurrence during Zen meditation? Or is this a very strange aberration?

Congratulations. Yours was a splendid development in meditation, and if you carry on your training you would soon attain a “satori” or awakening.

A good piece of advice is that you should continue your training as you have normally done. Do not make any special effort to train more intensely or for longer time. Do not long for a similar experience to occur. If it occurs again, just enjoy it; if it doesn't, it does not matter. When the time is ripe you will have a “satori”. Do not chase after the “satori”, let it develop naturally.

Yours is an example of meditating on Zhao Zhou's “wu”, or “mu” in Japanese, which means “nothing”. Zhao Zhou (Joshu in Japanese), who lived to 119 years in 18th and 19th century China, was one of the greatest Zen masters in history. A monk asked Zhao Zhou whether a dog had Buddha nature. Zhao Zhou answered with an emphatic “no”.

This was in direct contradiction to a basic Buddhist teaching that every sentient being, including a dog, has Buddha nature. (In Christian terms, every being is a part of God.) This seemingly irrational answer has become a famous “kung-an” (“koan” in Japanese). Zen students of the Rinzai tradition use this famous Joshu's Mu koan for cultivation. Zen students of the Soto school meditate on this Joshu's Mu. (Rinzai and Soto are the two main Zen traditions today.) Working on Joshu's Mu — asking why a dog has no Buddha nature, or meditating on nothing — has help many Zen cultivators attain “satori”.

One famous example was the great Japanese master Hakuin, the father of Japanese Rinzai Zen. Interestingly, Hakuin's favourite method of cultivation was not asking koans, which is the main method in Rinzai Zen, but meditating on Joshu's Mu. He would go into sitting meditation and visualize that from his abdomen to his soles he was Joshu's Mu. Then one day, in a flash of illumination, he experienced “satori”.

“Satori” or “awakening” is inexplicable. This does not mean we cannot describe it in words, but it means that no matter how accurately a master may describe it, those who do not have an experience of “satori” would not really understand the meaning although they may know the dictionary meaning of all the words in the description. A classic analogy is a mango. Suppose you had never eaten a mango. No matter how accurately one may describe its taste, you would still not know what it tastes like.

Nevertheless, despite its imperfection, a description is often useful; at least it gives some idea of what “satori” is. When you attain a “satori”, you are awakened to transcendental cosmic reality.

Reality is of two dimensions — phenomenal and transcendental. What we normally experience is phenomenal reality. Right now I am sitting on a chair and typing on the keyboard of my computer. As I look out of a window, I can see some leaves swaying in a gentle breeze, hear some birds singing, and smell the gentle fragrance of vegetation and of life. All these are phenomena, which means “appearances”.

Phenomena are not absolutely real. They are real only in relation to a set of conditions, such as the ways my eyes, ears, nose, and other organs interpret data. Another sentient being, such as a bacterium or a fairy, would interpret the same data very differently. A bacterium or a fairy would not experience any chair, keyboard, breeze, singing or fragrance the way we humans experience these phenomena. In other words, in the same space and at the same time, different beings experience phenomenal reality differently.

When we can “see” through, or break down, these conditions which limit or imprison ourselves, we experience transcendental reality. Transcendental reality is of different levels. When you said “The moon shines brightly over the floating world”, you were experiencing and describing phemonenal reality. When you have attained “satori”, depending on your level of transcendentality, you may experience “the floating world shines brightly over the moon”, or “there is no moon and there is no world, just the floating and the shine”.

The above is taken from Question 1 of January 2001 Part 2 of the Selection of Questions and Answers.