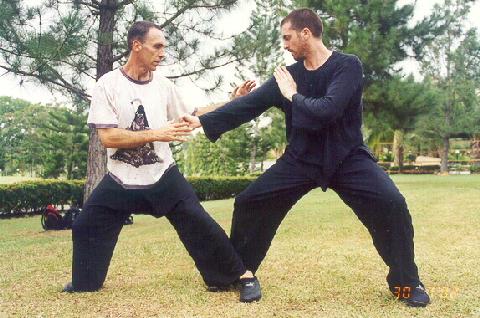 Could you please give a brief weekly timetable of a Taijiquan workout. I don't know how much time I should spend between forms and stance training and weapons.

Depending on various factors like aims and objectives, developmental stages, available time and resources, as well as individual whims and fancies, different workouts suit different people.

The following are three different weekly workouts for three different categories of students. Of course they are only suggestions and general guidelines. Interested students may make their own modifications.

The first category is for those who want to practice Taijiquan, or Taiji dance, for fun. They may or may not know that Taijiquan is a serious internal martial art demanding much effort, but they are generally not prepared to put in that kind of effort.

Their practice is mainly performing forms. If they know only one Taiji set, they would have to practice this set everyday. If they know a few sets, including weapon sets, they can practice a different set a day by roatation. They should perform the forms of the set without worrying about breathing, and without using mechanical strength. They should, however, pay some attention to good balance and graceful movements. They would get more benefits if they could just stand still and be relaxed for a few minutes before and after their set performance.

The second outwork is for those who know and wish to practice Taijiquan as an internal martial art, but are not ready to put in a lot of hard work.

Their practice can be divided into three aspects, namely forms, force training and combat application. They should spend about 50% of their training time on forms, and 25% each on force training and combat application. For form training, they follow the same format of the first group, except that they spend only about 50% of their training time, whereas the first group spend 100%. For force training, they practice the “Three-Circle Stance”, the pattern “Lifting Water” and the pattern “Grasping Sparrow's Tail” for about 5 minutes each. For combat application, they practice “Pushing Hands”, “Striking Hands” and simulated sparring for about 5 minutes each.

The third outwork is for dedicated students who wish to practice Taijiquan as an internal martial art. It demands hard work and is no fun, but if the students persist they will have many wonderful benefits and subtle joys.

The three workouts are meant for a week. Students should space out the materials sensibly for their day to day practice. They may, for example, practice the “Three-Circle Stance” everyday, but “Lifting Water” and “Grasping Sparrow's Tail” on alternate days. For “Pushing Hands” and “Striking Hands”, however, it is better to focus on one training sequence everyday for some time so as to consolidate the relevant skills developed, before moving on to the next sequence.

The above is taken from Question 8 of Feb 2004 Part 3 of the Selection of Questions and Answers.