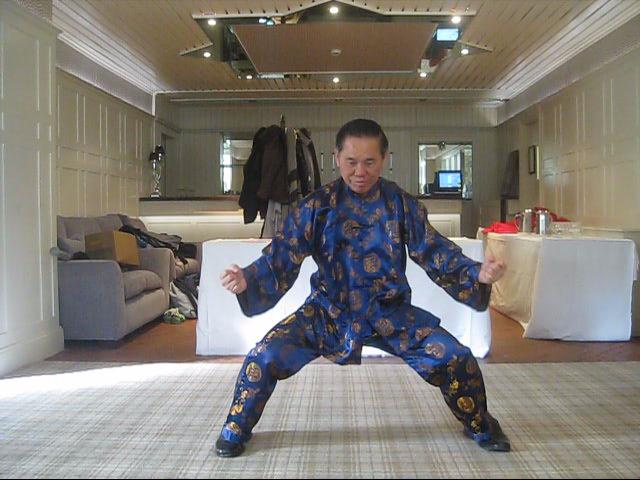 Could you tell me about the philosophy, theories, principles, practice and possibly some applications of Tiet Sin Kuen.

In Chinese philosophy, every being is composed of “jing”, “qi” and “shen”, which are “essence”, “energy” and “spirit”. Your “essence” is the sub-atomic particles that make up your physical body. Your “qi” is the energy that maintains and carries on life. Your “shen” is the real you. It is called differently by different peoples as the spirit, soul, mind or consciousness.

The theory behind the training of “Thit Seen Khuen” (or Iron Wiure Set) as well as all other genuine chi kung (qigong), is that by developing all the three components of “jing”, “qi” and “shen”, a practitioner develops wholesomely. And this theory has been confirmed by centuries of practical experience. If he neglects any one of these dimensions, his development would be incomplete.

Sadly, many martial artists today do not understand this philosophy and theory. Hence, though they may be physically strong, they are not healthy as they often sustain a lot of injury. They are also easily tired, which shows they lack vitality. They are often stressful and aggressive, which indicates that they have done poorly in spiritual development. They would have prevented this unhealthy development if they had a sound understanding of chi kung philosophy and theory.

Two important principles in the practice of “Thit Seen Khuen” are “noi ngoi sheong sau” and “kong yau ping chai”, which are in Cantonese pronunciation meaning respectively “cultivate internally and externally”, and “hard and soft being integrated”. Internal and external cultivation means training not just the physical body but also energy and mind. Hard and soft being integrated means that a practitioner is both powerful and gentle at the same time. Appreciating these two principles can readily show that if one practices “Thit Seen Khuen” as an isometric exercise, he is practicing wrongly, as this involves only the external and the hard, neglecting the internal and the soft.

The practice of “Thit Seen Khuen” or any force training should be consistent and regular, i.e. everyday for a reasonable period of time. Depending on the standard aimed at, and the developmental level of the practitioner, six month to a year of daily practice would be a reasonable period of time to attain remarkable result. A good time to practice is early in the morning, or in the evening or at night. One should feel more energetic and fresh after each training session.

The application of “Thit Seen Khuen” should not just be limited to martial purposes. An important kungfu tenet is “first good health, then combat”. As “Thit Seen Khuen” gives us good health, enhances our vitality and nourishes our spirit, its successful practice enables us to perform better no matter what we do — in both our work and play, and in our personal and public life. If by practicing “Thit Seen Khuen” a practitioner develops a lot of internal force enabling him to be a formidable fighter, but he becomes negligent in his work, difficult with his family and friends, and hard on himself, he would have failed miserably.

In terms of martial application, the value of “Thit Seen Khuen” is holistic. It gives a practitioner not only tremendous internal force but also agility and mental clarity, thus enabling him to be a better fighter no matter what techniques he uses. The techniques or patterns in the “Thit Seen Khuen” set are meant to develop internal force, and not meant for attack and defence movements.

Nevertheless, a master may use these patterns for combat, albeit with some modification of the form. For example, I can apply the first pattern shown in the short selection of my performance of “Thit Seen Khuen” shown here to break an opponent's arm as he attempts to strike me. Or if he holds my two hands, I can use this pattern to break his wrist while releasing the hold. Or if he tries to take me down with a “shoot” as in wrestling, I can apply this pattern to stop him and break his neck or strike his temples. This pattern, known in Sifu Lam Sai Weng's classic as “Protecting the Dan Tian”, is known in our school as “Cross-Road Scissor-Hands”.