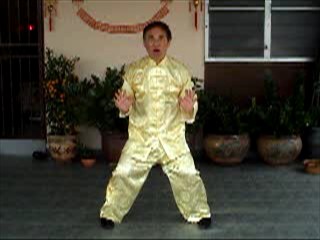 At the Shaolin Wahnam Institute, do you practice and teach Tiet Sin Kuen, and if so do you have any memorable experiences associated with practicing/training/teaching this set?

Moreover, many of my students learn from me in an intensive manner. The “Thit Seen Khuen” set is too long to be learnt in a short time. “Thit Seen Khuen” is a set of advanced chi kung exercises where emitting the correct sounds for particular patterns is important. It is different from sets like “Shaolin Five Animals” or “Flowing Water Staff” which are sets of combat techniques. An initiated student can learn such combat-technique-sets from my videos and have me confirmed and refined them when we meet. But this is not recommendable for an advanced chi kung set like “Thit Seen Khuen” where skills rather than techniques are learnt.

But in future I may teach “Thit Seen Khuen” as an elective set in Shaolin Wahnam. The main aim, however, is not to develop internal force (though that is also a good option and a great bonus) because we already have many methods to do so, but to preserve it as an advanced chi kung set.

Nevertheless, in my young days I taught “Thit Seen Khuen” to a few people. One of them was my sijat, or a student of my siheng, in the Chin Wah Hoong Ka Kungfu Academy. I taught him slowly — very unlike the way I teach now in an intensive manner. On the very first night of training, he told me he felt his arms very heavy. By the time I had taught him the first section of the set a few weeks later, he had developed so much internal force that none of his classmates wanted to spar with him.

The event leading to my teaching him “Thit Seen Khuen” was also memorable, and I can still remember the event quite clearly. During a free sparring session, he executed a fast sweeping kick at my ribs. It was a close-range attack and it was so fast that I had little time moving away. Spontaneously I responded with “Golden Dragon Plays with Water”, using my open palms instead of the dragon-hand forms as the pattern is normally performed.

This was not a particular good pattern for this situation, but that was the best I could react as the attack came fast. Just before his kick hit me, I exploded force using my palms. I was still in my False-Leg Stance, which is normally not an ideal stance to explode force. But I literally bounced him to fall backward over twenty feet! However, he was not hurt because I used “release” force (which sends an opponent flying away) instead of “hit” force (which can cause severe internal injury). The whole school, many of whom were practicing something else on their own, was shocked. He asked me how I could be so forceful. I told him it could be due to the “Thit Seen Khuen” I was practicing then. He begged me to teach him.