WHY IS PRACTICING DIFFERENT STYLES DETRIMENTAL TO OTHERS BUT CONTRIBUTING TO US? 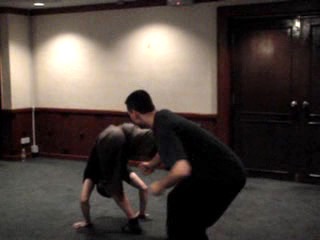 Sifu Roland and Sifu Charles at their Monkey tricks

However, for Shaolin Wahnam students these different styles will complement one another and enhance not only their kungfu attainment but also their daily life. I am aware that some people may not be happy with what I shall explain, and may accuse us for being boastful or conceited. As I have mentioned a few times, that is their business, but we are not afraid to speak the truth for the benefit of our students as well as other people who share our philosophy.

Our approach is different. We do not start with Wing Choon sets or Tantui sequences; we start with kungfu basics like stances, footwork, hand forms, exploding force, breath control, chi flow and mental focus, which can be applied to any styles. With this foundation, when we learn Wing Choon, Tantui or any other style, we experience different applications of the kungfu basics.

For example, other people learn how to perform a short strike using a short stance in Wing Choon, and then learn how to perform a long strike using a long stance in Tantui. As these two forms are diametrically different, they distract from each other. When they perform Wing Choon, their training in Tantui interferes with their Wing Choon movement. When they perform Tantui, their Wing Choon training interferes with their Tantui movement.

Our approach is different. We do not merely learn a Wing Choon strike or a Tantui strike. We learn how to make a strike using a stance. We do not just limit our short strike to a short stance, we may also use a long stance. Similarly we do not just limit our long strike to a long stance, we may also use a short stance. Hence, when we learn Wing Choon, Tantui or any other style, it provides a structure for us to apply what we have trained. Indeed, the more styles we learn, the more structures we have, which results in us becoming more combat efficient.

We do not face such self-imposed restriction. If someone criticizes us saying that our form is neither Wing Choon nor Tantui, we reply by saying that kungfu is alive, and we make an appropriate modification to suit the situation. To us our forms are our tools, they serve our purpose, not we enslave ourselves to them.

This does not mean we would readily disregard our form. We would not, for example, substitute a Wing Choon or a Tantui strike with a Boxing jab, or substitute a short stance or a long stance with bouncing about. We would not do so not because we are afraid of criticism - indeed, if if were advantageous to do so, we would - but because from both philosophy and experience we have found that using Wing Choon, Tantui or any kungfu form enables us to be more combat efficient than jabbing and bouncing about.

The above is taken from Question 4 January 2011 Part 1 of the Selection of Questions and Answers.