OPPONENT IS STRONG AND TIES YOU IN 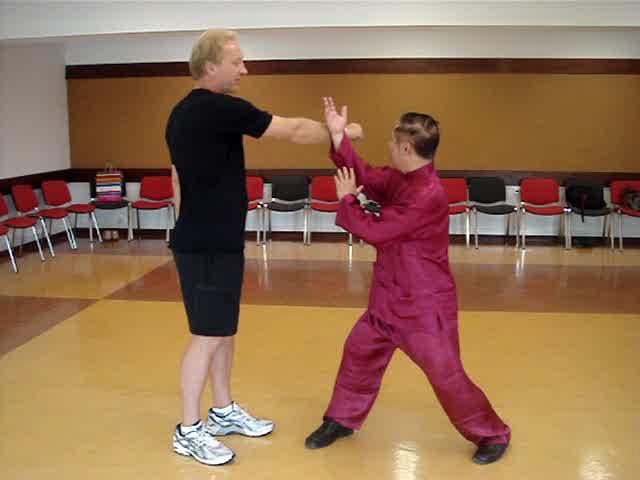 If I meet an opponent who has much internal force and uses his strong arms to tie me in, I find it hard to apply my combat sequences on him. What are your thoughts on this, sifu?

I am glad you ask this question. This was a common question in the past. All past masters had powerful arms. Hence, this was a question advanced practitioners soon faced as they progressed to spar at masters' level. They had to go pass the masters' powerful arms to join their ranks.

This was a good thing for us, because this means the past masters would have left a lot of material for us to benefit from -- if we know where to look for the material. Do you know where the material can be found?

Yes, some of the material can be found in records of past fights, which may not be easily available. But the biggest bulk of the material is easily and presently available, but it is found in places where most people least expect it. Do you know where it is?

It is found in classical kungfu sets. If you take a moment to reflect, you will find that this is logical because kungfu sets represent the crystallization of techniques, tactics and strategies that masters in the past used in their fighting. They must have gone past many opponents with strong arms before they could become masters.

I have a lot of classical kungfu sets. Even if one does not know many classical kungfu sets, today he can easily learn them from books or even form the internet. But he will not know the tactics and strategies hidden in the open in the classical sets. Even those who have practiced their classical sets for years do not know how to use the techniques in their sets for simple combat, least of all know the tactics and strategies for sophisticated tasks like getting past powerful arms.

But after knowing the principles involved which I shall share with you, you and other instructors and advanced students in our school will know how to decipher these tactics and strategies from the classical kungfu sets you have learnt or will learn. You will add an interesting dimension to the learning of classical kungfu sets.

Incidentally, your question comes at an opportune time in the development of our school. We have completed the first phase of laying the foundation. We are now ready to move to a more advanced phase where we can enjoy the depth and richness of Shaolin and Taijiquan. Thus, I have begun teaching many classical kungfu sets.

The only counter I can think of is developing a quick break in arm contact and then using agility to move away in different angles, then using confusing angles to attack. This would avoid his strong points of very good hand sensitivity and forward momentum. What tactics or strategies you would advise me to use in this scenario?

The counter you suggest is reasonable, but it is only one of many ways to go pass the strong arms of opponents and defeat them. In fact, every kungfu style has its own special ways to go past strong opponents, otherwise that style would not survive to this day.

Do you know what style would your suggestion belong to? Think of the main features of this style: quick break away, agile movements, confusing angles to attack. Yes, it is Monkey Style. Nick and even Martin would pluck some peaches.

Now, let us look at a style you are excellent in -- Taijiquan. What Taijiquan features you can use to meet an opponent with internal force and strong arms to stop your combat sequences? In fact there are many because it is the forte of Taijiquan to overcome bigger and stronger opponents.

In fact I have just posted some videos on my website on this topic. Please see especially Using Taijiquan Mechanics to Overcome Bigger, Stronger Opponents.

If a strong opponent strikes you or pushes at you, don't retreat your steps. Stay your ground but sink back your body, rotate your waist, use "Immortal Waves Sleeves" to deflect his attack in an arc, and then turn it round to counter-strike him. This is most typical of Taijiquan. This is what we first do when we practice Pushing Hands.

Now, if he charges at you with full force, what would you do? If the attack is medium range (as he charges at you, it won't be short range), just sink your stance and pull him down with his head or chest hitting your front knee, employing "Black Bear Sinks Hips". Then dislocate his head, or appear to, using "Double Dragons Play with Pearl", letting him fall onto the ground with your hands on his head under control.

If his attack is long range, move a step back and simultaneously apply "Black Bear Sinks Hips" as before, or "Old Eagle Catches Snake" to fell him face-on onto the ground. Finish him off with "Double Dragon Plays with Pearl" on his head.

If he kicks at you, that would be easy. Sink back your stance using "Strike Tiger Poise", and let his kick pass. Immediately move in to fell him using "Carry Tiger Back to Mountain", and finish him off with a combat-ending strike while he is on the ground.

These are techniques. If you use these techniques haphazardly like many ordinary martial artists do, in a hit-and-run-one-pattern-a-time manner, these techniques are unlikely to be effective. You need to use tactics and strategies to implement your techniques effectively.

A good strategy is to engage him in full or at least frequent arm contact! Isn't this playing into this strength? Yes, if you use Monkey Style. But no, if you use Taijiquan. In fact, in Taijiquan you are turning his strength into his weakness! This is the beauty and profundity of Taijiquan. Remember the forte of Taijiquan is to beat a bigger, stronger opponent. Precisely because of his bigger size and strength, you beat him. This is applying the principle of "minimum force against maximum strength."

A good tactic is to let him attack, then keep contact with him. If he doesn't attack, you make a false attack, the purpose of which is not to strike him but to tempt him into contact. This is the principle of "false-false, real-real".

When you are in contact with him, do not make your decisive strike too soon. Stay with him for a while, and flow with him. Let him attack first, then turn the table back to him. This is the principle of "starting later, but arriving earlier".

If he does not attack, you can make false moves to tempt him to respond. Then you follow up from his responses. He may be big and strong like a bull, but with Taijiquan you can tie a rope though his nose and lead him round and round.