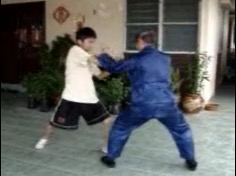 These different styles greatly enrich our understanding of the style we have chosen.

I believe we in Shaolin Wahnam have arrived at a very special point in kungfu history. We are now in a very special and privileged position to offer our students and instructors a wide variety of kungfu styles as well as relevant arts, like business negotiation, singing and art appreciation, which not only enhance our kungfu performance but more significantly also enrich our daily lives.

If just one out of the 50 Eagle Claw sequences can be used to overcome any combat situations, isn't it a waste of time to learn so many kungfu styles and kungfu sets? Of course, the answer is "No."

What is said about Eagle Claw is also true for the other styles. We can just use the first sequence of Tantui (in fact we did that during the UK Summer Camp 2007), or any one sequence from Triple Stretch or Flower Set to overcome any combat situations! We can also use just one pattern from Wing Choon, Flower Set or Drunken Eight Immortals to neutralize any attacks!

It is precisely because we have learnt many different sets and styles that we are able to come to this rare and privileged position. If we concentrate on just one style, we shall be limited to the philosophy and practice of only this one style.

Our rare and privilege position now enables us to aspire to attainment only a few rare grandmasters in the past could aspire to. You can aspire to attain a level not just of Yang Lu Chan but of Zhang San Feng. Others like Tim, Anthony Spinicchia, Roland and Markus can aspire to levels not just of Yim Wing Choon, Thiet Kiew Sam, Wang Lang and Fong Sai Yoke, but of Ng Mui, Pak Mei and Chee Seen.

Although we now often refer to Zhang San Feng as the First Patriarch of Taijiquan, during his time he was never known as a Taijiquan grandmaster. (The term "Taijiquan" was not coined yet.) But the best of Yang Lu Chan's Taijiquan was still far off from the general internal arts of Zhang San Feng.

When we say that we have the opportunity to aspire even beyond what past masters like Yang Lu Chan, Yim Wing Choon and Thiet Kiew Sam aspired to, of course we never mean that we are as good as them. I believe our attainment is still low when compared with that of these past masters. But we have resources that these past masters did not have. Yang Lu Chan, for example, had no resources to learn Iron Wire, nor Thiet Kiew Sam to learn Grasping Sparrow's Tail - regardless of whether they needed it. Yet, we now have resources that were unthinkable even as recent as 50 years ago!

The above is taken from Question 2 March 2011 Part 2 of the Selection of Questions and Answers.