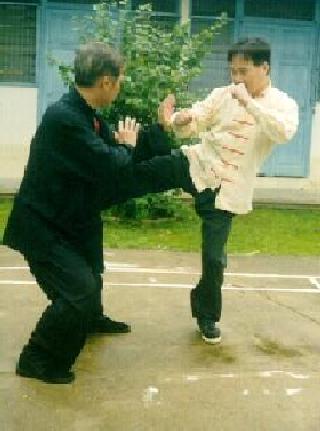 What I respectfully would like to ask you is whether I should continue with Tai Chi or begin training kung fu. In my city there is Wing Tsun (I looked at a training session and they spent a lot of their time on sparring), North Shaolin Kung Fu (they also spent a lot of time sparring) and Wushu. I intend to look at a training session from each of these schools and, based on what I have read on your website, try to choose one.

If your sole purpose of training a martial art was just learning to fight, which is not a wise use of your time, you should join one of these schools that spend a lot of time on sparring. But there are other important considerations. For example, do these schools spar using kungfu techniques and skills? If they free spar haphazardly instead, it is likely you would injury both your spirit and body in the training.

But the most important consideration is whether you should leave your teacher in a time of his need. Even if you had to leave, you should choose a more appropriate time. If a teacher were immoral or vicious, like stealing people's wives or causing harm indiscriminatingly, you should leave him without question. But your teacher is honorable and deserves your respect. Being unable to defend himself against the thieves is nothing dishonorable. Greatness lies not in never falling, but in rising after every fall.

I would advice you to stay with your teacher and help him restore the glory of Tai Chi Chuan. You school has good points to start with. Yours comes from a lineage that believes that Tai Chi Chuan is a martial art. Your teacher talks about and often demonstrates Tai Chi combat application.

What is missing is systematic practice of this combat application, not just attempting it in an ad hoc manner. From the intermediate level onwards, combat training and force training (including training of skills like footwork and agility) should take more than 80 percent of your training time. I would suggest that you talk to your teacher politely and tactfully about this. It may also be a good idea if you talk to the class openly. First praise and thank your teacher, and propose a systematic training programme with emphasis on combat application.

The onus is not to learn which technique to counter which attack. This can be learnt in a few minutes, and which you teacher knows well. The onus is to develop combative skills, such as spacing, timing anf fluidity of movements. Developing combat skills, which means among other things that one can apply the pre-arranged technique with right spacing, timing and smooth movements, takes at least weeks.

At the initial stage of one-step pre-arranged sparring, all the common attacks in all the four categories of striking, kicking, felling and gripping, and their respective counters should be covered. This will take a few months of consistent practice. At the end of this stage, all students should be able to defend against or counter any one common strike, kick, felling or gripping attack correctly and skilfully. In other words, if an attacker throws you a punch or a kick, or attempt to fell you to the ground or grip your arm, you should be able to neutralize the attack spontaneously.

The next step is to train sequence sparring. In other words, instead of just attacking you with one pattern and then stop there for your reaction, your sparring partner attacks you with a short sequence of attacks. He may, for example, initiates with a right punch, then a left punch and follow up with a right side kick.

When you are reasonaly skilful in countering one sequence of attacks, you can work out other sequences. For example, your partner may still initiate with a right punch, but he will follow up not with a left punch but with a right side kick, then with a left whirlwind kick. This second attack sequence as well as your counters are also pre-arranged. Gradually you can work out other attack sequences and their counters.

At first you and your sparring partner know before-hand which sequence will be used in an encounter. This is what we call “pre-choice” in our school, Shaolin Wahnam. Then you progress to “self-choice”, in which case the initiator or attacker chooses a pre-arranged sequence. As the responder or defender does not know which sequence is chosen, he just responds accordingly, but once the response is made the sequence continues as pre-arranged.

Then you can progress to another stage of combat training called “external change” in our Shaolin Wahnam sparring methodolgy. Here the responder allows the pre-arranged sequence to flow for a while, then intercepts it before the initiator can complete it, and counter-attacks using another pre-arranged sequence of his own choice. For example, the initiator plans to use the sequence of right punch, right side kick and left whirlwind kick, but before he could use the left whirlwind kick, the responder intercepts the sequence and begins another sequence.

This sparring methodology is systematic. If you follow the procedure for two years, you should be able to free spar effectively using typical Tai Chi Chuan techniques and skills. If you have any questions, please post them on our Shaolin Wahnam Discussion Forum. You will also find a lot of information on sparring methodology on my website, especially at Video Series showing Taijiquan Application for Combat and Video Clips and Notes on Shaolin Wahnam Sparring Methodology.

I would recommend that you and your Tai Chi teacher or one of his senior student attend my Intensive Tai Chi Chuan Course. I do not offer such courses often, but there will be one held in Malaysia from 20th to 26th January 2006. Please see Intensive Taijiquan Course for details. You will be able to spar using Tai Chi Chuan during the course itself. You can then incorporate what you have leanrt into your Tai Chi Chuan school when you return home to help your teacher restore the glory of Tai Chi Chuan. My intensive courses are meant to supplement, not replace, what you are practicing in your own school.