MODERN MONKS AT THE SHAOLIN TEMPLE AT HENAN 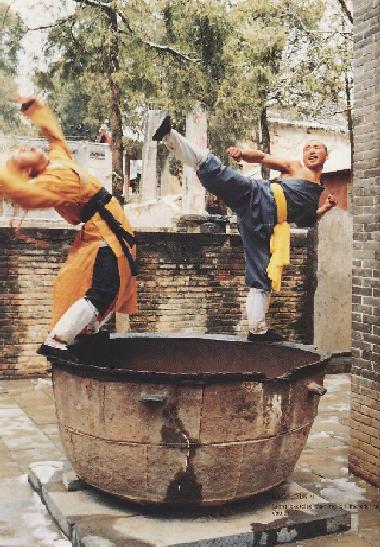 Are the monks in the temple at Henan trying to be something they are not?

No, I don't think the Henan monks are pretending. They are teaching what they themselves have learnt from their teachers. In fact they have done a very good job spreading Shaolin Wushu to the world.

The problem, in our opinion, is that many people, probably including many of the monks themselves, are unaware of the difference between Shaolin Kungfu and modernized Shaolin Wushu.

A major contributing factor to the confusion is that in Chinese the word “wushu” means what in the West would call “kungfu”, but “wushu” is promoted as a sport and not as a martial art. It is also significant that at the time when many of these monks were in their childhood or even before some were born, genuine traditional kungfu was virtually wiped off from the face of China during the Cultural Revolution of the 1960s when practicing any traditional arts like kungfu, chi kung and Zen was considered counter-revolutionary, the most serious crime in China at that time. Most of these monks, therefore, have not been exposed to genuine traditional Shaolin Kungfu!

A brief historical background may give some insight into this situation, as well as into the source and the reason for the differences between traditional Shaolin Kungfu taught in Shaolin Wahnam and modernized wushu taught by the modern monks from the Shaolin Temple at Henan.

The Shaolin Temple was originally located at Songsan in Henan in north China. During the Ming Dynasty, another Shaolin Temple was built at Quanzhow in Fujian in south China by imperial degree. Henceforth, the focus and importance of Shaolin shifted from the north to the south.

When the Qing Dynasty replaced the Ming, the Qing emperor Yong Zheng ordered the burning of the Quanzhou Shaolin Temple by the Qing Army assisted by mercenary Lama kungfu experts from Tibet. Among the few who escaped were the Venerable Chee Seen and the Venerable Jiang Nan.

Chee Seen's most senior disciple was the Venerable Harng Yein. Harng Yein taught Chan Fook, who left the Shaolin Temple at the Nine-Lotus Mountain before its burning, and returned to his home province in Guangdong where he taught my sigung, Ng Yew Loong. My sigung brought the Shaolin arts to Malaysia and taught by sifu, Lai Chin Wah, who was more widely known in martial art circles as Uncle Rigghteousness.

Hence, our Shalin Wahnam lineage is very clear. The name “Wahnam” is named after my two sifus, Lai Chin Wah and Ho Fatt Nam. Both their lineage can be traced directly to the southern Shaolin Temple.

Many people have heard about the burning of the Shaolin Temple by the Qing Army, but they do not know that it was the one at Quanzhou and later another one at Nine-Lotus Mountain that were burnt, and not the one at Henan. Later in 1928 the Shaolin Temple at Henan was also burnt, but not by the Qing Army but by a Republican warlord during the subsequent Kuomingtang period. But long before this time, the Henan Temple had been deserted, and no kungfu or wushu was practiced there. The burning of the Henan Temple had nothing to do with kungfu or wushu. It was burnt because a rival warlord used it as his military camp.

However, probably due to policy difference as the Chinese government promoted modernized wushu as a sport and not traditional kungfu as a martial art, the Venerable Hai Deng soon left the Henan Shaolin Temple, which became a flourishing tourist center. Neither kungfu nor wushu was taught in the Temple then, but wushu schools mushroomed around the Temple, often taught by monks seconded from the Temple.

Wushu soon became very popular. Many Chinese rushed to learn wushu at the wushu schools around the Shaolin Temple at Henan because it was a good means to ensure employment as bodyguards or security guards at the many newly extablished shops, offices and factories, or as wushu instructors to meet the growing demand for wushu instruction. The highest hope was to become film stars, following the example of Jet Li.

The above is taken from Question 2 Dec 2003 Part 1 of the Selection of Questions and Answers.