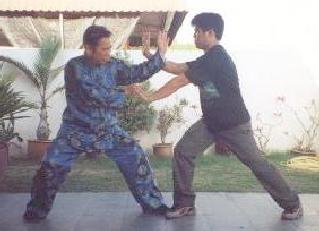 Bruce Lee's main principle stemmed from the idea that any style can be beaten because it has a structure and therefore a weakness. If your stances and forms constitute a particular “style” then according to the above statement it would be inferior to what Bruce Lee called “no-method”.

Bruce Lee's principle or philosophy was an opinion or a speculation, and not an explanation as Eastern philosophies are. His opinion here was both mistaken as well as internally untenable.

Of course any style can be beaten; there is no such a thing as an invincible style. If there were, then there would not be any other styles; all martial artists would practice this invincible style.

But the reason for a style (any style) to be beaten is not because it has a structure. There are many and various reasons. Better speed, power and fighting experience are some of the reasons why one combatant beats another. The reasons can also be related to structure, for example the victor is more skillful in applying techniques provided by the structure of his style, or the structure is functional in contributing to combat efficiency.

Indeed, if all other things were equal, a style having an appropriate structure for combat is superior to another style without any structure. In other words, if you practice a martial art where you use ways of fighting which have been found effective by past masters, you will be more combat efficient than another person who fights at random. These preferred ways of fighting constitute the structure of that martial art, and in the case of kungfu, stances and traditional forms are an integral part of this structure.

This brings us to another point, that is Bruce Lee's principle as cited by you is internally untenable because his ways of fighting was a particular style of martial art (called Jeetkwondo) and it had a structure. Whenever Bruce Lee fought, he always did so according to the structure of his style, He focused on speed and power, his techniques were mainly kicks, and his footwork was generally bouncing about. Bruce Lee never fought haphazardly, which would be the case if he had no structure to follow. Bruce Lee used preferred methods, it was not “no-method”.

Why? The answer is simple, though not many people may be aware of it. These many kungfu or wushu practitioners have never learnt how to use stances and traditional kungfu forms for combat, they only learn to use them for solo demonstration — what past masters referred to as “flowery fists and embroidery kicks”.

Let us take an analogy. You and your friend want to go from New York to New Jersey. Your friend has a most effective machine for this purpose — an automobile. You have no machines, only your two legs. Your friend may have a beautiful philosophy of how cars work, may have frequently and proudly shown his car to his friends, and he may know how to step on the accelerator and how to hold the steering wheel, but he does not know how to drive. Using his car he will never arrive, but you will.

What should your friend do? He can keep his car for exhibition purposes, and walk. Alternatively, as he already has a car, he can learn to drive. What should kungfu and wushu exponents who cannot use their kungfu and wushu to fight, do? They can keep their kungfu or wushu for demonstration purposes, and punch and kick widely and bounce about when they have to fight or spar.

Alternatively, as they already know stances and kungfu or wushu forms, they can learn to use them to fight. Obviously, finding instructors to teach you how to use kungfu or wushu to fight is much more difficult than finding instructors to teach you drive a car. We at Shaolin Wahnam are dedicated to this purpose. For those who are interested, studying our webpages on combat principles and applications is a useful first step.

The question and answer are reproduced from Question 2 of the March 2003 Part 2 issue of the Question-Answer Series.