PRACTICING MORE BEFORE TEACHING OTHERS 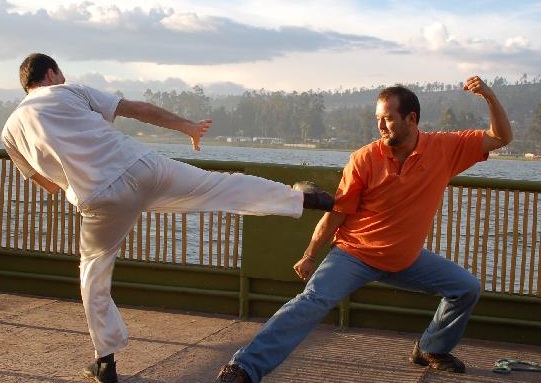 Tai Chi Chuan is not a dance; it is an internal martial art

Thank you for asking me to teach Tai Chi Chuan. But I thought I had to practice more before I taught others.

This is a common response from those whom I ask to teach Taijiquan or Shaolin Kungfu. It is an interesting contrast to those who want to learn from me to become teachers even before they are students of the arts.

They told me that they wanted to learn from me free, expected me to house and feed them, and in return they would help me to teach -- when they did not even know the most elementary aspects of the art, whereas even my beginning students were far ahead of them in ways they could not imagine.

Of course you would continue to practice, but even at this point you would make a better Tai Chi Chuan instructor than many well-known ones. You have internal force, and despite your small size you can apply Tai Chi Chuan to handle bigger-sized opponents. Not many Tai Chi instructors today have these two qualities. At your worse, you teach Tai Chi Chuan as an internal, martial art, whereas many others teach it as an external dance.

As you teach, you will also improve both your understanding and performance of Tai Chi Chuan. In fact your improvement would be more if you are also a teacher. There are a few reasons for this. As a teacher, you are "forced" to practice well so as to be a good example for your students. Otherwise you may only practice whenever you like.

As you have to teach according to our syllabus which has been carefully planned to give students the best benefits in a most cost-effective way, your own progress will be systematic as well as comprehensive. Otherwise your progress, if any, is haphazard.

Being a teacher you will see Tai Chi Chuan movements from a deeper level than students do. You will also be careful to apply Tai Chi Chuan principles to your movements, like being relaxed and focused as you move, and rotate your waist instead of just moving your shoulders or hands. Students, who are ignorant of these principles, are generally less careful. In this way you can improve your own performance of Tai Chi Chuan tremendously.

When you teach, you will benefit your students as they have a chance to learn a wonderful internal martial art instead of an external dance, and you yourself will benefit from your own teaching. It is an example of goodness results in goodness.

The above is taken from Question 5 August 2013 Part 1 of the Selection of Questions and Answers.