WOULD YOU BE KIND TO HOLD AN INTENSIVE TAIJIQUAN COURSE? 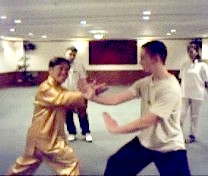 You do not have Intensive Tai Chi Chuan Course regularly like you have for Intensive Chi Kung Course and Intensive Shaolin Kungfu Course. Would you be kind to hold one this year? I am sure it will benefit many Tai Chi practitioners.

But if many people indicate that they would like me to conduct a particular course and make a commitment to attend, I would find time to do so. We had a large Intensive Tai Chi Chuan Course recently where you also attended, and many people benefitted.

It is telling that despite doing well in the previous Intensive Tai Chi Chuan Course, you wish to attend another again. Many people may think it is a waste of time. If they want to learn from me again, they would ask for a more advanced course. But our students know better. They know from experience that when they attend a same course, they benefit more.

Personally I myself am amazed at what one can learn from an Intensive Tai Chi Chuan Course. Of the many benefits, a participant would be able to develop internal force and use Tai Chi Chuan patterns for combat. These two benefits would be enough to justify the time and money spent to attend the course. He can verify that he has these two benefits at the course itself, he does not need to return home to practice for six months to verify them.

If I were a Tai Chi instructor but has no internal force and does not know how to use Tai Chi patterns for combat, and has been longing for years to have these invaluable Tai Chi Chuan skills, I would pay ten times the fee to acquire them in five days. In five days! It is just too good to be true. I might not believe it was true, but I would rather be a fool for five days than a fool for life.

We are ridiculously generous. We even tell Tai Chi instructors of other schools that if they find any of our techniques or skills useful, they can teach them to their students or schools without having to acknowledge that they learned the techniques or skills from us. We sincerely want Tai Chi practitioners to benefit from this wonderful art, not debase it into a dance.

We are teaching the very techniques and skills characteristic of Tai Chi Chuan, like using minimum force against maximum strength and flowing with an opponent's momentum, which they read about in classics but are unable to realize. Either they do not believe in what we say, despite many testimonials verifying our claims, or they are too proud to learn from another teacher. As I have often mentioned, this is their problem, not ours.

The above is taken from Question 4 August 2013 Part 1 of the Selection of Questions and Answers.