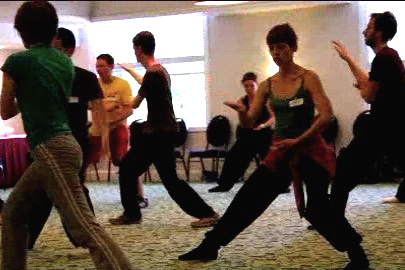 At the chi kung course in Muscat you asked some Tai Chi practitioners to first perform their Tai Chi the way they normally performed, then you asked them to perform the same forms the way you advised them.

That was an illuminating experience. It was not only beneficial to the Tai Chi practitioners but also to other people. It shows how one can use chi kung in other activities.

I asked the Tai Chi practitioners to perform twice, the first time in their normal way and the second time in a chi kung state of mind, so that they could feel the difference.

Hence, with the internal force they turn their Tai Chi dance into an internal art. They still would not know the martial applications of Tai Chi Chuan yet, for which they would have to learn from a competent teacher. But at least their Tai Chi Chuan is internal, and bring them the three categories of benefit of internal force, namely maintaining life, enhancing life, and enabling them to have better result no matter what they do.

It is bafflingly easy to do this once they can enter into a chi kung state of mind, and enjoy the wonderful benefits that practicing an internal art will bring. Their short demonstration also indicates to others how they too can apply chi kung in their daily activities. No matter what they do, whether working at their office or enjoying their hobbies, if they perform whatever they do in a chi kung state of mind, they will have better results.

The above is taken from Question 2 August 2013 Part 1 of the Selection of Questions and Answers.