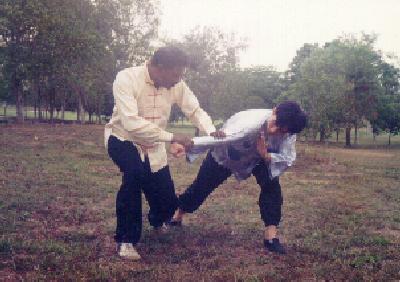 I cannot find a sparring partner. So, will I be combat efficient if I practice the kungfu forms on my own?

No one can be combat efficient by practicing only kungfu forms. This is a main problem facing many kungfu and wushu practitioners, including some masters. They may perform their forms beautifully and win international competitions, but unless and until they learn and practice combat application and develop force for their combat application, they cannot be combat efficient.

A main reason why combat application is not systematically taught is that its methodolgy is generally lost. Borrowing from karate, taekwondo and kickboxing, today kungfu practitioners who wish to learn combat efficiency jump straight to free sparring after learning kungfu forms. This is putting the cart before the horse. In all kungfu training in the past, free sparring which is called san da in kungfu terminology, came at the end, not at the beginning, of a long programme of combat training.

When I learned kungfu, all my four masters forbid us to free spar until we were ready. Engaging in free sparring without first training how to spar will inevitably make the practitioners fight like children.

But this does not mean without a partner you cannot practice combat application. Indeed, solo practice is essential in kungfu training. This is what masters do most of the time, and it is the reason why they can remain to be so combat efficient.

What you practice on your own for combat efficiency is not kungfu forms or sets but other things like combat sequences and their variations. You will learn these in my Intensive Shaolin Kungfu Course, where you will also have the opportunity to spar with live partners. It will be very helpful if you have a life partner to train with when you have returned home. But if you haven't, you will spar with an imaginary partner, the method of which you will also learn at the course. In some ways, sparring with an imaginary partner is more beneficial than sparring with a life partner.

The above is taken from Question 4 March 2003 Part 3 of the Selection of Questions and Answers.