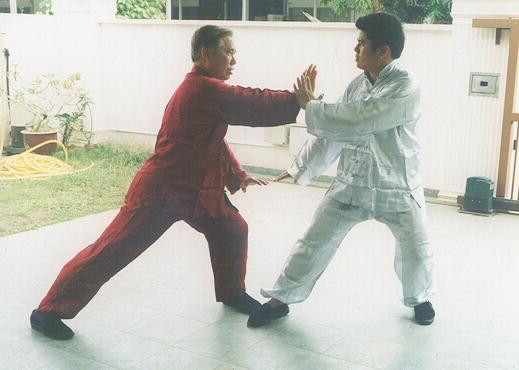 Applying combat sequences is a major secret in free sparring

Sigung, you were unbeaten in sparring in your young days. Can you please share your secret with us?

In my younger days, especially between about 20 to 40 years of age, I spent a lot of time looking for sparring partners. At first I could beat them not because I was good but because I was smart. I chose opponents whom I had confidence of beating.

I made my victory doubly sure by doing a lot of homework, i.e. by practicing over and over again sequences which I used in the sparring. I devised the sequences from the way I expected my opponents would fight. This was not difficult because most of my opponents then were Taekwondo and Karate exponents, with some Boxing and Judo practitioners, and the way they fought was quite stereotyped.

For example, if I had to spar with a Taekwondo black-belt, I knew that he would probably start with some jabbing or side kicks, then round-house kicks, and eventually reverse round-house. So I would avoid his initial jabbing and side kicks, slant my body backward to avoid his round-house kicks, and when he executed a reverse round-house I would swiftly move forward with a coup de grace. I would practice this sequence many, many times, sometimes with modifications. When the actual situation occured during sparring, and this planned scenario almost always happened, I could use my practiced sequence to defeat my opponent easily. I always gently tapped my opponents; I never hurt them.

Having learnt from Sifu Ho Fatt Nam, my combat efficiency, including my internal force, improved tremendously. But initially I still used the same strategy. I chose sparring opponents whom I had confidence in beating, and I did a lot of homework. But gradually I did not have to do much homework as I could respond spontaneously and correctly to opponents' attacks. As I became confident of my combat efficiency, I did not go out to look for sparring opponents.

I always used kungfu, including good stances, in my sparring. I never used Kick-Boxing, Muay Thai or any other martial arts, although I sparred with opponents from all styles. The difference was that in my earlier years of sparring I used simple punches and kicks, whereas in my later years my techniques were more sophisticated, like felling and chin-na. I discovered that when I used sophisticated kungfu techniques, my opponents just did not know how to defend against them.

So, if I have to give a secret for my unbeaten sparring record, I would say that I used a superior fighting art against opponents whose fighting arts were inferior to mine. Presuming that the skill levels were about equal, if I used simple punches and kicks, my opponents would have no difficulty defending against them. But if I used sophisticated techniques, like subtle felling and chin-na attacks, together with tactics and strategies that created situations for me to apply these attacks, my opponents had no techniques in their repertoire to defend.

The above is taken from Question 1 of August 2016 Part 1 of the Selection of Questions and Answers.