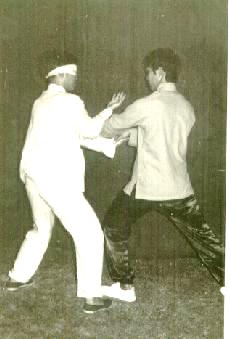 “Asking Bridge” (“Men Kiu”), “Sticking Hands” (“Chi Sau”) and “Pushing Hands” (“Tui Shou”) are some of the ingenious ways in Hoong Ka, Wing Choon and Taijiquan respectively to train combat skills. In these methods, two practitioners keep their forearms in contact, and engage in attacking and defending moves.

The techniques and tactics they use are quite different. Hoong Ka “Asking Bridge” is relatively hard, and focuses on sinking an opponent's bridges. The two practitioners move above in various stances.

Wing Choon “Sticking Hands” are relatively stationary, with both practitioners at the Goat Stance. Their hand movements are fluid and in circles, though attacks usually come in straight lines.

Hap Ka, White Crane and Choy-Li-Fatt are famous for their arm techniques, as distinct from using fists, elbows, fingers or palms.

Hap Ka, which means “Knight-Family Kungfu”, is a combination of Lama Kungfu of Tibet and Southern Shaolin, with a predominance on Lama Kungfu. Lama Kungfu makes extensive use of the arms like the long limbs of apes and wide wings of cranes.

While Choy-Li-Fatt practitioners use their arms frequently, they use their fists, tiger-claws and palms extensively too. Choy-Li-Fatt is probably the most “long bridge, wide stance” amongst the Southern styles.