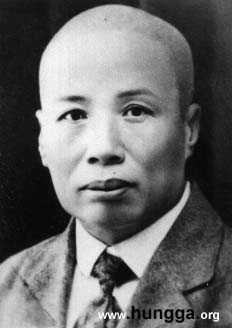 I am currently reading the foreword by Grandmaster Lam Sai Weng (Lin Shirong) in the books written by his students (the foreword was published both in “Taming of the Tiger in Gung Pattern” manual and “Tiger and Crane” manual). Can you briefly explain the most important points he mentions, like waang-jik, tan-tou, jeun-teui, cheut-yap, sei dou, ng mun, sang sei ji lou, etc?

The foreword contains the essence of Grandmaster Lam Sai Weng's teaching, not just on kungfu but on living life rewardingly. It also exhibits typical points found in great masters' writings. It is short, of only one and a quarter pages, and concise, where a single word may carry a lot of information.

It is also arcane, hiding secrets in the open. The uninitiated may not find much information in the foreword, but the initiated can get a rich source of wisdom. How much benefit one can derive from this short foreword often depends on the knowledge and experience of the reader himself. “Waang-jik, than-thou, jeun-theui, cheut-yap” literally means “horizontal-straight, swallow-shoot, forward-backward, out-in”. This does not make much sense to the uninitiated.

Just before this, the Grandmaster mentions that first of all one must understand the principles. Next, practice the standard procedure. Then with correct effort and energy practice what is explained here, i.e. the Tiger-Crane Set and its combat application. Only then his progress will be remarkable.

This is what you have done. This is also what we in Shaolin Wahnam do. Hence, readers who wonder at our rapid progress may get the answer form these few words of the Grandmaster!

Grandmaster Lam, like most other great masters in the past who recorded the essence of their teachings, did not explain what “the principles” were. Why didn't he? It was because this foreword was not meant to be a self-taught manual for beginners. It was meant for his own students who had followed his teaching, theoretical and practical. Hence, the intended readers already knew what these principles were. This is an important fact many modern readers do not realize. It also explains why one must learn personally from a competent teacher if he wishes to have great results.

These principles the grandmaster mentioned concerned basic training. Basic training did not refer to combat application. It did not even refer to performing the Tiger-Crane Set in solo. It referred to stance training, footwork, body movement, breath control, being relaxed, being focused, and exploding force.

The student should follow standard procedure in his basic training, which is another way of saying he should not attempt to be smarter than his teacher by introducing material his teacher did not teach him. Many modern students attempt to be smarter than their teacher, though they may not realize it. They bounce about like Boxers when their teacher teaches them to move in kungfu patterns; they lift weights when their teacher teaches them to develop force through stance training.

When a student has become proficient in his basics, he proceeds to practice the Tiger-Crane Set and its combat application with “right effort and energy”. If he practices irregularly, it is not the right effort. If he becomes tensed and aggressive in his practice, he is not using the right energy.

Only when he has become proficient in the Tiger-Crane Set and its combat application, which is explained in the text along with the patterns individually, though it is not shown in pictures, the student progresses to understand the various points you have mentioned.

Briefly, the explanations of the points are as follows.

These points are not exclusive; they may overlap or coincide. For example, striking an opponent, which is “shoot”, is often accompanied with an explosive shout, which is “out”. These principles are meant to enhance our performance, not to restrict it. For example, when an opponent executes a snap kick at your groin, you can respond with “False Leg Hand Sweep”, which may be rightly referred to as “horizontal” or “straight” depending on whether you wish to emphasize its defensive or attacking function. Arguing that it should either be “horizontal” or “straight” and not both, or that it is neither “horizontal” nor “straight” because its movement is actually diagonal, is defeating the purpose of using these principles.

“Saei for” means “four aspects” and here as used by Grandmaster Lam, they refer to “heart”, “eyes”, “hands” and “feet”. “Heart” means that the intention is decisive, “eyes” means the vision is clear, “hands” means the attack and defence are fluid, and “feet” means the movements are fast and agile.

“Ng mun” means “five gates”, and refer to top, middle, bottom, left and right. The Grandmaster explained that on top there were seven openings, namely two eyes, two ears, two nostrils and one mouth. In the middle there was the organ heart, or the solar plexus. At the bottom there were yin and yang, which referred to the sex organs and the anus. Left referred to the left side of the exponent, and right referred to his right side. In combat, an exponent using “four aspects” might attack the “five gates” of his opponent.

“Sang sei ji lou” means “the way of life and death”. The Grandmaster explained that based on “pat mein”, or “eight faces”, which refer to the eight compass directions, a combatant should evaluate the strength and weakness of his opponent as well as himself. He should avoid his own weakness, which is avoiding “the way of death”, and focus on his strength, which is choosing “the way of life”.

While these points are helpful for combat efficiency, I would not regard them as the most important. Other more important points include what Grandmaster Lam mentioned at the start as well as the conclusion of this short piece of writing.

One example in personal lives is that if you wish to be successful in your career, you must be prepared to work hard — and smart. Another example applicable to public affairs is that if we want peace, we are unlikely to achieve it through merely talking, we must be militarily strong to enforce it through war if necessary.

At the end, Grandmaster Lam said that kungfu is not just an art of combat, but also an art of good health. We not only train to be physically and spiritually strong, but also by nourishing our spirit, training our body and nurturing our energy, we have good health and longevity. By penning these words, the Grandmaster hoped this national treasure would be passed on to posterity.

The above is taken from Question 4 of May 2007 Part 2 of the Selection of Questions and Answers.