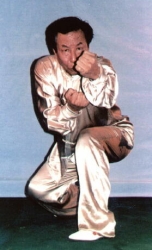 I have been thinking about some of the things you said at the Summer Camp about the Muslim masters at the Shaolin Temple. As a Muslim I find this fascinating. I have tried to find out more about these past masters in our lineage, but unfortunately I did not find anything on the Internet. Do you know where I can find out more? Do you know any of the names of the great Muslim masters of the Shaolin Temple and anything about their lives? I would be very grateful for any further information.

Chaquan, a widely practiced beautiful Northen Shaolin style, was named after its founder Cha Mi Er, which is the Chinese pronunciation of the Muslim name Jamil.

The famous modern Chaquan master, Wang Zi Ping, was a Muslim. He convincingly defeated many masters from many countries who came to China to test the combat effectiveness of kungfu.

The founder of Bajiquan, Wu Zhong who lived in the 18th century, was also a Muslim

Admiral Cheng He of the Ming Dynasty, who led the largest naval fleet known in history to as far as the Americas, was a famous Muslim.

Another Muslim master who practiced Shaolin Kungfu was Ma Xue Li who lived in the 18th century. He practiced Xinyi-Liuhequan, or Mind-Intention-Six-Harmony Kungfu, and was a disciple of the Xingyiquan patriarch, Ji Long Feng.

Amongst the famous styles of Shaolin Kungfu, Chaquan, Bajiquan and Xinyi-Liuhequan are widely practiced by Muslims.

Ma Xian Da, a Bajiquan master, won the first kungfu free sparring competition organized by the present Chinese government in 1952, beating other traditional masters. He was the author of many kungfu and wushu books, and edited the Chinese Wushu Encyclopaedia. Although he was a famous wushu coach, he laments that wushu practitioners cannot fight, and criticizes sanda as devoir of wushu features.

Zhao Chang Jun was the national wushu champion of China for 10 consecutive years from 1978 to 1987. Yet, he strongly advocates for traditional kungfu, being a Tantui master himself.