OPPORTUNITIES TO DEMONSTRATE IN PUBLIC AND WIN COMPETITIONS IN MODERNIZED WUSHU 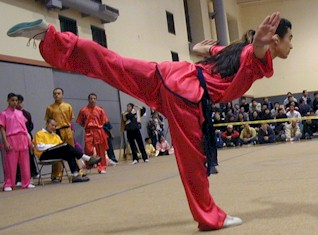 Modernized wushu is a magnificent art and requires dedication to master, but it is different from traditional kungfu. The picture above, reproduced from http://www.csc.gov.sg/html/newsletter/aug2005/c46.html shows a wushu demonstration.

I want to learn Shaolin Kung Fu for every benefit it gives. I can tell you now I don't feel healthy. I can't really spare like I wish to. And even though I'm Christian, I believe that every good philosophy and spiritual well being will agree with my faith.

What I am going to say may come as a big surprise and disappointment to you, and may be offensive to many other people. But I would like to tell the truth, especially to a young, sincere enquirer like you.

It is sad but true that there is little benefit in much of the Shaolin Kungfu, including modern Shaolin Wushu, practiced today. Benefits like good health, combat efficiency, moral development and spiritual cultivation — benefits that many aspiring students of Shaolin Kungfu hope to have — are not found. Instead you may find benefits like opportunities to demonstrate in public and to win competitiones.

Many Shaolin kungfu and wushu practitioners suffer from knee injuries. Those who engage in free sparring sustain internal injuries that are routinely left unattended to. This is not conducive to good health.

Many Shaolin kungfu and wushu practitioners only practice kungfu forms and never learn combat application. Those who attempt free sparring use Kick-Boxing or other martial art techniques but not the kungfu or wushu forms they learn. Some of them may be good at hitting people, but they cannot defend themselves. They may not realize it but this is evident in their mistaken concept that taking punches and kicks is a necessary part of sparring.

Winning competitions is much emphasized in many schools. The desire to win, often at all cost, often results in poor sportsmanship and unhealthy rivalry.

Instead of being relaxed and calm, which are characteristics of an ideal martial artist, practitioners usually tense their muscles and are mentally stressful in their training. Because they are being routinely hit in free sparring, they often become angry and aggressive.

Those who merely practice demonstrative forms, and never spar, realize they have missed something important, but they lack the honesty to admit it nor the courage to rectify their inadequacy. All these are not conducive to moral development.

Spiritual cultivation may be talked about but is little understood and almost never experienced. Most practitioners today pay attention only to the physical, and have little or no concept of the spiritual.

As a result of the Shaolin training he usually becomes more devoted to his own religion because the training enables him to directly experience many of the teachings in his religion. For example, love and faith are two very important aspects in Christian teaching. In moments of deep meditation in his advanced training, he directly experiences, not merely talks about, love for humanity and faith in the Supreme. He becomes a more devoted Christian as these two crucial aspects of Christian teaching become personally meaningful to him.

Practitioners of genuine, traditional Shaolin Kungfu honour the religion of others, even when they may not agree with some of the religious beliefs. You may be pleased to know that many Shaolin masters were Christian, besides Buddhist, Taoist and Muslim. Disciples of different religions practiced and lived together happily and peacefully in the Shaolin Temple in the past, and they now do in our Shaolin Wahnam Family.

The above is taken from Question 4 of January 2008 Part 2 of the Selection of Questions and Answers.