SHAOLIN KUNGFU AND THE SHAOLIN TEMPLE 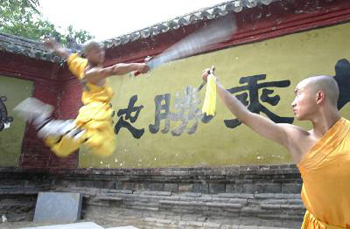 Students of Songshan Shaolin Wushu Vocational School perform exercises outside the Shaolin Temple today in Dengfeng, China. This is the first Wushu school in China, and is known as the cradle of Wushu champions. The picture is reproduced from People's Daily Online at http://english.peopledaily.com.cn/200407/07/eng20040707_148763.html

Why did the Shaolin Temple stop teaching Shaolin Kung Fu and what are they teaching now? I'm very disappointed to hear this and I'm not sure I want to hear the answers to my new questions.

It was the southern Shaolin Temple that was burnt, and it was burnt not once but twice as there were two southern Shaolin Temples, an open one in Quanzhou and a secretive one on the Nine-Lotus Mountain. In the first burning, the Qing Army was helped by Lama kungfu experts from Tibet who used the infamous “flying guillotines”. The second burning by the Qing Army was led by Pak Mei, who was a Shaolin grandmaster but sided with the Qing.

Even before the burning of the northern Shaolin Temple in Henan in 1928, Shaolin Kungfu was no longer taught there. During the time of the Chinese Republic, 1911 to 1945, the Henan Shaolin Temple, or what remained of it after the 1928 burning, was deserted.

When the present Chinese People's Republic took over in 1945, practicing any traditional arts, like kungfu, chi kung, painting and music, was considered bourgeois, and therefore taboo in a Communist country. The worst period was during the Cultural Revolution in the 1960s when practicing any traditional arts was considered counter-revolutionary, the most serious crime in the country at that time.

Happily when the modern Chinese leader Deng Xiao Ping regained power in the 1970s, China began to open its doors to the world, and conditions changed drastically which eventually led China to become a great economic power today. The present Chinese government promotes kungfu, which is called “wushu” in China, not as a martial art but as a sport. It is not practiced in its traditional styles like Praying Mantis, Eagle Claw, Hoong Ka, Choy-Li-Fatt or Wing Choon, but collectively as wushu.

The Shaolin Temple in Henan was rebuilt, after Jet Li's firm, “Shaolin Temple”, had made the name “Shaolin” world famous. The Temple soon became a very successful tourist attraction. The Shaolin master, the Venerable Hai Deng, was invited to the Shaolin Temple to teach traditional Shaolin Kungfu, but he soon left, probably due to policy differences.

Meanwhile a lot of wushu schools mushroomed around the Shaolin Temple, teaching wushu as a sport. Some of the wushu instructors were modern Shaolin monks seconded from the Temple, some merely put on monk's robes.

Later “sanda”, which means “free sparring” but was actually Kick-Boxing in this modern Chinese context, was introduced. Recently the wushu schools around the Temple were moved to other places. Wushu teams were sent to various countries for demonstration. Some of these wushu exponents, amongst them some modern Shaolin monks, broke away from their teams and remained to teach their art.

The above is taken from Question 3 of January 2008 Part 1 of the Selection of Questions and Answers.