WHERE IS SHAOLIN KUNGFU TAUGHT IF NOT AT THE SHAOLIN TEMPLE? 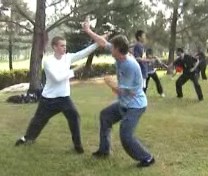 And if not (at the Shaolin Temple), where is it (Shaolin Kungfu) being taught?

To have a good answer, it is necessary to be clear about the question. This may sound odd, but it is where the confusion starts.

The question is “Where is Shaolin Kungfu being taught?” It is very important to be clear about what is meant by “Shaolin Kungfu”. Most people, often without their conscious knowing, accept Shaolin Kungfu by its outward forms. So long as the forms they practice are Shaolin kungfu forms, they regard it as Shaolin Kungfu.

If you are contented to accept outward forms as “Shaolin Kungfu”, then it is taught in many places all over the world, including by modern Shaolin monks inside and outside of China.

As I have said before, wushu is a magnificent art and it demands much devotion to master it, but it is different from traditional Shaolin Kungfu. Wushu practitioners, for example, do not practice combat application. Some wushu practitioners are formidable fighters, but they use Kick-Boxing or other martial techniques but not wushu or kungfu forms for combat.

Many wushu practitioners sustain injuries, especially knee injuries, from their training. We do not regard this as contributing to good health. Wushu training pays no attention to spiritual cultivation. When wushu was invented by the modern Chinese government, it was meant to be a physical sport.

If you conceptualize Shaolin Kungfu not just by its external forms but by its benefits of combat efficiency, good health and spiritual cultivation, then Shaolin Kungfu is very, very rare today. We are proud to say that we in Shaolin Wahnam are one of these rare schools.

Like what you have said, a lot of people, especially those who are practicing only external Shaolin forms, are not happy to hear my answer. But when I am asked respectfully by sincere persons who want to know, I have to courageously tell the truth as a Shaolin disciple, rather than say pleasant things to please the questioners.

The above is taken from Question 2 of January 2008 Part 1 of the Selection of Questions and Answers.