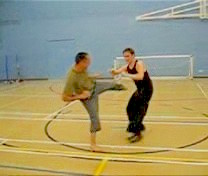 I've recently been studying Chinese martial arts, although, my background is Taekwondo. Do you suggest I should start with an external style or an internal style of kungfu? My favourite is Taiji.

I would suggest you start with an internal style. Many external martial artists, including those who practice Taekwondo, sustain a lot of internal injuries. Their injuries were caused not just by sparring; their solo practice itself caused much energy blockage which can lead to physical and emotional illness.

Practicing an internal art which pays attention to energy flow will help to clear the blockage, enabling you to return to good health. Only when you have good health would you consider combat efficiency. This is a basic philosophy in Chinese martial arts, especially in Shaolin Kungfu and Taijiquan, and this contrasts sharply with non-Chinese martial arts, such as Karate, Taekwondo, Muay Thai, Kickboxing and Western Boxing, which often sacrifice health for combat efficiency.

As your favourite is Taiji, that would be excellent. But I would suggest you practice Taijiquan, and not Taiji. According to my definitions, Taijiquan is an internal martial art, but Taiji is some sort of dance using external Taijiquan forms. It is not common to find Taijiquan today, so if you can't find a Taijiquan school to learn from, even learning Taiji may serve to provide the soft dimension to your hard Taekwondo. You would, however, not be able to use Taiji for self-defence, in which case your Taekwondo would be useful.

If you are unable to learn genuine Taijiquan or any other genuine internal martial art, choosing an external style of kungfu, like Praying Mantis, Eagle Claw, Hoong Ka, Choy-Li-Fatt or Wing Choon, is better than training Taekwondo or any other external non-Chinese external martial art like Karate, Kickboxing or Western Boxing. This is, of course, my opinion.

You may, as many people do today and which Bruce Lee did to an excellent level, combine the beautiful forms of kungfu gymnastics with the sparring of Taekwondo. The result will be a hybrid. It is something that I would not recommend, though it is probably the most practical course of action to most people. Ironically, due to their narrow perspective and limited exposure, some of them honestly think they are improving kungfu, or improving Taekwondo, even claiming they have brought kungfu to a new dimension with their innovation to meet changing times.

The best course of action I recommend is to seek a genuine Taijiquan or Shaolin master and learn from him. If you want the best, of course, you must be ready to make sacrifice, but the rewards are overwhelming more than the money, effort and time you invest.

If we are speaking about genuine kungfu, irrespective of whether it is an external style or an internal style, the fundamentals include stance training to develop force and practicing techniques for self defence. Force training and combat efficiency are the two most important aspects of all styles of kungfu. The difference between external and internal styles, and between high level and low level kungfu, lies in their approach and attainment.

Logically, external styles approach the two fundamentals using relatively hard and external methods, whereas internal styles use gentle and internal means. High level kungfu achieve good results in a short time whereas low level kungfu achieve little even after long periods. This is so obvious, yet many people, due to ignorance, stubbornness, prejudice or other factors, are blind to such simple facts. For example, they insist that their art is kungfu when they cannot defend themselves at all, or they claim their art to be of high level when despite training for many years they are still stressful and in pain.

The above is taken from Questions 8 and 9 of Jan 2003 Part 3 of the Selection of Questions and Answers.