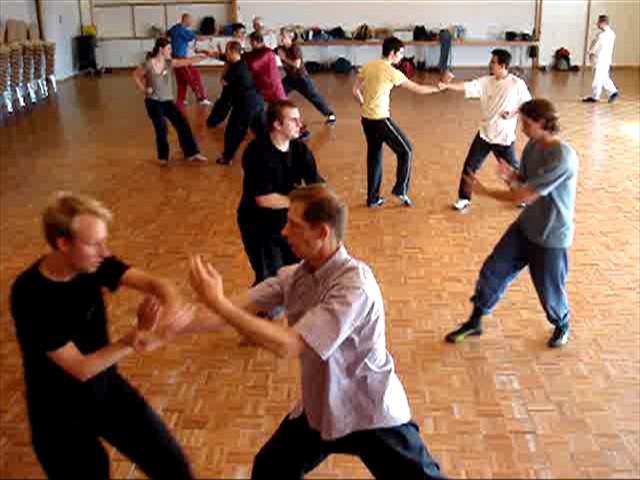 I am waiting to learn Shaolin Kungfu but really nobody knows anything about Shaolin in my country. There are only Karate and Taekwondo schools here. I know a little Wing Chun. I buy Shaolin DVD or CD. Can you help me?

Genuine Shaolin Kungfu is very rare today, even in China! What is being taught in China today is mainly modernized wushu, which is different from traditional kungfu.

Traditional kungfu of various styles were brought out of China by many masters in the past two centuries. Luckily these masters brought genuine kungfu out of China to many countries, especially to Southeast Asia, North America, Europe and Australia where there were substantial overseas Chinese communities. If it had only remained in China, it might be totally lost during the period of Cultural Revolution in China in the 1960s when anything traditional was considered counter-revolutionary, which was the biggest crime in China at that time.

However, due to numerous factors, much of the traditional kungfu outside China became greatly debased. In most cases only the outward forms remain, the essence is lost. There are two aspects of the essence, internal force and combat application. As a result, today we have a great majority of kungfu practitioners who can only perform beautiful kungfu forms but have no internal force and cannot apply their kungfu for combat.

Some of them borrow sparring methods from Karate and Taekwondo, and more recently from Kick-Boxing. These kungfu practioners are able to fight, but they use Karate, Taekwondo or Kick-Boxing techniques. A few even reach a point where they believe kungfu cannot be used for fighting!

This is the pathetic situation of kungfu today. There are three main categories of Chinese martial art practitioners. One, there are those who practice modernized wushu, a demonstrative art invented by the present Chinese government in the 1970s. Two, those who practice traditional kungfu forms but have no sparring experience at all. Three, those who use Karate, Taekwondo or Kick-Boxing for sparring.

We in Shaolin Wahnam belong to the rare minority who still have this essence of internal force and combat application. We are also among the more vocal as well as willing to share our arts with others. Most of this rare minority prefer to keep their arts as secrets, and of course it is their right to do so.

Understandably, many people attack us relentlessly. Some do so out of disbelief, and some out of self-interest. We remain steadfast in our policy. We sincerely believe we have a treasure to share, but only with deserving seekers. We therefore do not wish to waste time arguing with those who prefer to practice only outward forms or use Karate, Taekwondo and Kick-Boxing for sparring. They too have their own right to practice what they want.

If you are interested to practice traditional Shaolin Kungfu that uses internal force and kungfu techniques for sparring, we shall be happy to share the art with you if you follow the Ten Shaolin Laws. A good way is for you to first learn some basic kungfu forms from some local teachers or from my books, and then attend my Intensive Shaolin Kungfu Course. Hopefully you may one day spread the wonderful Shaolin arts in your country.