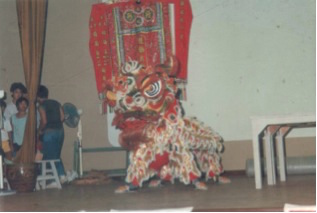 I attempted to search on google for any suitable Lion Dance Troupes or Groups or classes in the London area. I felt I could train with them in the meantime until such time as I could attend one of your courses in future. I found a lovely and friendly group who were very welcoming. They taught me with open hearts. They specialise in Lion Dance.

Sifu, could you please share any beautiful and wonderful memories and stories you have from your Lion Dance days?

Just before rehearsal of the Lion Dance, I left the Soon Tuck Association. It was easy to know the rehearsal of the Lion Dance as the Lion music was very loud. After the rehearsal had started I went back to the association. Uncle Righteousness could not wait, and he had to choose another classmate to be the Lion Tail. Ah Weng, my junior classmate, was chosen. I thought I was smart, but Ah Weng was smarter. He wanted to learn Lion Dance from Uncle Righteousness. He performed the Lion Tail so well that later for the competition he was chosen. At the height of Lion Dance where there were more than a hundred kungfu schools in Penang, and many of them taught Lion Dance, Ah Weng was known as the "Lion King". Of course I am very proud of him.

Another real life story of Lion Dance concerned a big boss in Tikam Batu, a small town near Sungai Petani in Malaysia where I now live. He bullied my Lion Dance troupe from Kuala Muda, another small town. I was then teaching Shaolin Kungfu and Lion Dance in Shaolin Wahnam Association, and the Kuala Muda Youth Lion Dance troupe was under me. I went to see the big boss. He closed the door so that I could not escape. But he was very courteous and no harsh words were uttered. Later he apologised and gave a sumptuous dinner with traditional gifts of oranges and a big red packet with money. I became famous after the incident.