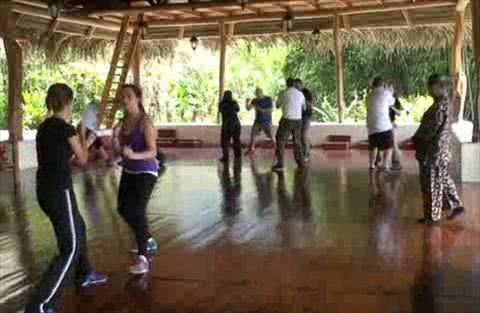 It was amazing that in the sparring practice yesterday, no one was hurt! How was that possible?

To be injury-free in sparring is our norm. It was also the norm in the past. It should also be the norm now, but is actually not. A main reason why anybody practices any martial art is not to be hurt at all in sparring and in real fighting.

But martial arts today have been so debased that to be hurt even in sparring with classmates is the norm. It has been debased to such a ridiculous stage that both masters and students submit themselves to be punched and kicked by their sparring partners in routine practice when fights in real life seldom happen in modern law-abiding societies!

How was it possible that no one was hurt in sparring yesterday? It was because we practiced a genuine martial art!

That is a one-sentence answer. More details are as follows.

It is worth pointing out that many were fresh beginners, and the hall was crowded due to the large number of participants. The punches and kicks were real. Towards the end of the session, I told the participants that if they found their sparring partners competent, they should really hit their partners hard.

Then, why was no one hurt?

The training was gradual and systematic, and we paid much attention to the principle of safety first.

Everything was pre-arranged at first. Initiators used only one particular form of attack, and responders knew exactly how to respond. Speed and force were controlled, starting at level 1, meaning little speed and little force.

More forms of attack and responses were added, and the control was gradually released. Gradually speed and force progressed from level 1 to level 2, then to level 3. Eventually the participants engaged in free sparring.

Because the progress was gradual and systematic, no one was hurt, which is our norm. There was also a lot of fun and laughter, which is also our norm.

The above is taken from Question 1 November 2012 Part 3 of the Selection of Questions and Answers.