WHETHER A TAIJIQUAN TEACHER CAN USE HIS ART FOR COMBAT 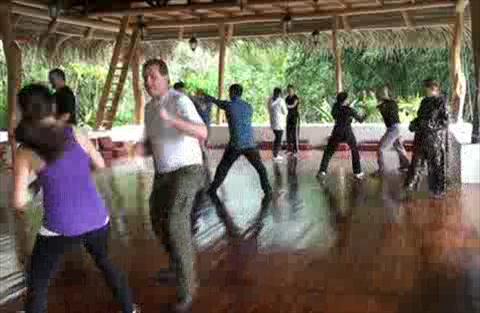 As far as I know, the Tai Chi masters and schools you mentioned do not normally teach Tai Chi Chuan for combat. Indeed very, very few schools in Malaysia or anywhere else in the world today, including in China, teach Tai Chi Chuan as an internal martial art. Most of them teach it as a form of recreation.

There are a few ways to know whether a Tai Chi Chaun teacher (or a teacher of any kungfu style) can use Tai Chi Chuan (or any kungfu style) for combat. The most obvious, of course, is to see him engaged in combat, such as actual fighting or friendly sparring.

Asking a teacher to show you whether he can fight, is both impolite and risky. He may hurt you to teach you a lesson. But politely asking whether his students can demonstrate some combat applications may be permissible. Nevertheless, there are some hitches. Someone may give a good demonstration of combat application but still be unable to fight in a real situation. On the other hand, if a teacher refuses to show, it does not mean he can't. In my young days, when people asked me whether kungfu could be used for fighting, I usually asked them to attack me to find out — not necesarily in an unfriendly manner. Now I usually don't bother.

For example, it is obvious to the initiated, though it may not be clear to you, him and his students, that the Tai Chi teacher in the video you showed me, does not know how to use Tai Chi Chuan for self-defence. If a Karate or a Taekwondo black-belt were to attack him, he would be beaten badly.

Notice that in the Pushing Hands demonstration his stance is exposed throughout and his partner's hands are on his body, which means an opponent would easily kick his groin or strike his chest in real combat. Had they been practicing combat application, they would have learnt the hard way from direct experience that such weaknesses would cause them many hits.

Notice also the way the teacher pushes his students. His back foot is lifted, causing him to be uprooted, and he pushes like splashing water upward in a sea. The students are pushed back not by his force but by the students jumping back themselves.

The above is taken from Question 8 of May 2008 Part 2 of the Selection of Questions and Answers.