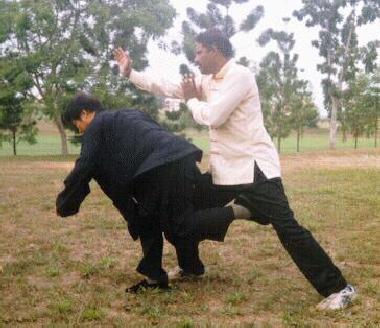 I read the information on Shaolin history and Kungfu on the internet and I have been interested in learning more about the Shaolin religion and the art of Shaolin Kungfu for quite a while. I would be grateful if there is any way you could help me.

While the Shaolin Monastery is Buddhist, the Shaolin arts which are practised world-wide are non-religious; anyone of any religion, or the lack of one, can practise and benefit from the Shaolin arts without adversely affecting his own religious conviction. There have been many Shaolin masters inside and outside China who are Christain, Muslim and Taoist.

There is no such a thing as a Shaolin religion. The Chinese concept of religion is quite different from that in the West. Strictly speaking the term “religion” does not exist in the Chinese language! The nearest term the Chinese have for what the West would call religion, is “jiao”, which means “teaching”.

Often, the word “zong” which means “tradition or heritage” is prefixed to “jiao”, indicating religion as a form of teaching with a tradition or heritage. The three greatest teachings in Chinese history are Confucianism, Buddhism and Taoism. This explains why when you ask Chinese people what religion they profess, unless they are Christians or Muslims, most of them would have some difficulty answering you.

This does not mean that the Chinese are not religious or spiritual. If we arbiturarily take "religious" to mean adhering to metaphysical beliefs, and "spiritual" to mean believing in the existence of spirits (divine, human and otherwise), the Chinese are far more religious and spiritual than Westerners. One may ask, “Why, then, Chinese do not regularly go to temples to pray — like what Christians and Muslims do once a week in churches and mosques?” The answer is that they have their temple (place of worship) in their house, where they pray every morning and evening. I am refering here to traditonal Chinese, like those in South East Asia; Chinese in modern China may have a different set of beliefs and practice.

The “zong jiao”, or what Westerners would call religious teaching, in the Shaolin Monastery was Zen Buddhism. There are three traditions of Buddhism, namely Theravada, Mahayana and Vijrayana. Zen Buddhism is a major school of Mahayana Buddhism.

The onus of Zen Buddhism is “not dependent on words; pointing directly at mind”. This is a Zen way of saying that while studying scriptures and other texts may be helpful, at best it only leads to intellectual understanding. Spiritual attainment is experiential, not intellectual. In other words, it is not enough to merely read about and understand spiritual attainment; we have to directly experience it. The highest spiritual attainment is to break down the illusion of the phenomenal world and actualize transcendental cosmic reality, described as enlightenment in Buddhism, and return to God, unity with the Ultimate or attaining the Way in other religious teachings.

As the phenomenal world is a creation of mind, the most simple, direct and effective way is to work on mind, and this is best done through meditation. Once the illusion is dispelled, enlightenment is attained in an instant.

Interestingly, the term “Buddhism” is a Western label. The Buddhists themselves in China, as well as in India, Japan, South East Asia and elsewhere did not call themselves Buddhists, or call their religion Buddhism. What then did they call themselves or their religion? They did not have any specific terms, as these terms were not necessary. Defining (which means limiting) one group according to religious beliefs was alien in Eastern societies; religious freedom was, and still is, an innate quality amongst orientals.

Shaolin Kungfu is one of the three precious Shaolin arts, the other two being chi kung and Zen. This classification is arbiturary and for convenience; in reality the three arts are closely integrated. The basic level of Shaolin Kungfu is combat efficiency; the second level is health and vitality; and the highest level is intellectual and spiritual development. A Shaolin Kungfu master who can fight very well, but is poor in health and low in spiritual attainment, is a master at the lowest level.

As in Zen and chi kung, kungfu attainment is experiential, not intellectual. It is helpful to read about Shaolin Kungfu to have a sound philosophical understanding, but inevitably you have to practise, practise and practise to experience its benefits. To have good results you have to learn from a genuine Shaolin master. If you learn from videos, you will probably succeed in learning only kungfu gymnastics or kungfu dance. You must also be prepared to put in some reasonable effort and time; otherwise you would probably get more benefits from playing football or kungfu dancing.
Reproduced from Question 6 of March 1999 Part 1 in Selection of Question-Answer Series