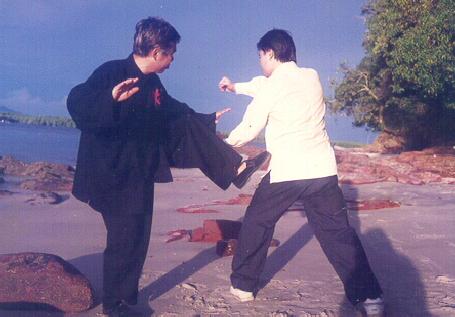 I'm an Italian student of Jujitsu. I'm also learning Chen Style Taiji and Henan Style Xin-Yi. I'm a bit confused about the use of kicks. Which kicks are effective in a fight?

It is a misconception, even amongst kungfu students, that there are few kicks in kungfu and that these kicks are ineffective. Actually there are more kicks in kungfu than in all the other martial arts put together. In Shaolin Kungfu, for example, there are 36 kicking techniques.

All these kicks are effective, otherwise they would have been eliminated in kungfu history. Nevertheless, there are less kicks in Chen Style Taijiquan and Henan Style Xing Yi Kungfu than in Shaolin Kungfu, but still kicking techniques in these two kungfu styles are important and effective.

But the principles and applications of kicks in kungfu, irrespective of whether they are in Shaolin, Taijiquan, Xing Yi Kungfu or any other kungfu styles, are different from those in other non-Chinese martial arts like Taikwondo, Muai Thai and Kickboxing. There are some innate weaknesses in kicks, such as the exponent's balance and mobility are affected while he executes a kick. Hence, amongst other considerations, the advantages of the kick must outweigh the innate disadvantages in a combat situation before the exponent would kick.

Throwing kicks freely as in many other martial arts is contradictory to basic kungfu principles. It blatantly goes against the first principle of “safety first” in kungfu. If all other things were equal, a person executing a kick exposes himself to serious counter-attacks against which it may not be easy to defend. For example, if your opponent strikes your leg as you kick, it would be difficult to defend yourself.

Then, why do many kungfu students have problems against kicks? It is because not only they do not have the skills and techniques to counter the kicks — or in many cases, to counter against any attacks — they do not even know the principles of kicking attacks and defences.

On the other hand, why are kicks so popular in Taekwondo, Muai Thai and Kickboxing if the exponents expose themselves dangerously? The answer is that they are protected by safety rules. In these martial arts, or sports, you cannot, for example, strike the kicking leg to fracture it, or drive a leopard punch into his groin to smash his testicles!

The above is taken from Question 7 Feb 2004 Part 1 of the Selection of Questions and Answers.