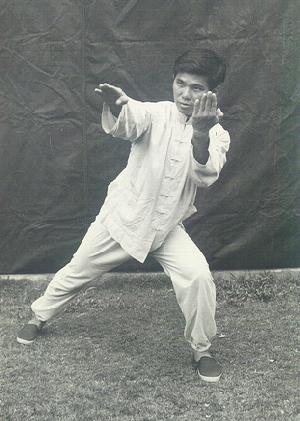 My school teaches hard, external training with no internal training at all. This atmosphere has made some of my Kung Fu brothers very competitive when they train with me. Although I am able to handle their attacks quite easily during Chi Sau, I often sustain bruises on my arms as a result of blocking their aggressive attacks. My own attacks often feel weak by comparison.

The classification of kungfu styles into hard and soft, external and internal, is relative and arbitrary. Wing Choon Kungfu provides an interesting progression. At the beginning stage, Wing Choon Kungfu is hard and external. Practicing with a wooden dummy is a good example of hard, external training.

At the intermediate stage, Wing Choon Kungfu is hard and internal. Practicing Siu Lin Tau (or Siu Lim Tau as it is called in Yip Mann Wing Choon) using “jing” or internal force, is a good example. “Chuin kheng” or “inch-force”, where a practitioner can inflict serious injury on an opponent at very close range, is a manifestation of hard, internal power.

At the advanced stage, Wing Choon Kungfu is soft and internal. Practicing “Chi Sau” or “Sticking Hands“ is a good example. “Theng Kheng” or “Sensing Skill”, where a practitioner can effectively maneuver an opponent's movements without having to look at them, is an application of soft, internal training.

Hard, external training, especially when done with combative intent and muscular tension, makes the practitioners competitive and aggressive. This is the case with your kungfu brothers, as well as most other external martial artists. In my opinion, such training is detrimental to both physical and spiritual health.

There are two main reasons why you often sustain bruises on your arms and your own attacks feel weak, namely you use hard techniques and you lack internal force. You use hard techniques in your defence, such as blocking the attacks head-on. If you use soft techniques (even though they may be external), such as deflecting the attacks following their momentum, you may not only avoid the bruises but also remain calmer and converse more energy for other purposes.

For example, if your opponent attacks you with a right cup-fist and your block with a left “tan sau”, or “mirror hand” (moving your hand from your right to your left), your defence is hard and external. If you response with a left “pak sau”, or “slap-hand” (moving from your left to your right), your defence is soft and external, and you avoid sustaining bruises.

However, if you have internal force, you may block an opponent's right cup-fist with your left “tan sau” head-on. Here your response is hard and internal. Not only you will not sustain any bruises, if you are skilful and powerful enough, you may dislocate his elbow or fracture his arm.

Your attacks feel weak because you do not have internal force, neither do you use (sufficient) muscular strength. This is the same case as Taiji dancers fighting against external martial artists. Their movements (in attacks as well as defence) may be relaxed and graceful, but they lack force. They forget, or do not know, that being “soft” is not being listless or without force.

If you examine this situation more deeply, you may discover some illuminating points that will help you in making your decision in question as well as in your future kungfu development. Great Wing Choon masters, including Sifu Yip Mann and the first patriarch Yim Wing Choon, were generally small sized, yet they were tremendously powerful. The reason, of course, was that they had tremendous internal force.

But many modern Wing Choon masters are muscular, and some even encourage external strengthening like weight lifting and body building. Obviously somewhere down the generation lines, internal force training was lost.

Your kungfu brothers and instructors are a case in point. To develop power, as well as for combat application, they employ hard, external means, forgetting or not knowing that at the advanced level Wing Choon Kungfu is soft and internal. You know or may be vaguely aware of this point, but you lack to acquire or even understand internal force.

The above is taken from Question 4 Aug 2004 Part 3 of the Selection of Questions and Answers.