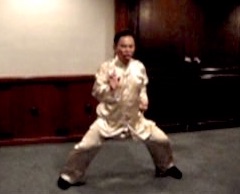 I wanted to tell you how much I appreciated the Intensive Shaolin Kungfu course, and how thankful I am to have been able to attend. As I said at the graduation dinner I have been doing martial arts for many years, but in all those years this last week was the first time I had felt my arms charged with internal force with nearly every movement. I had felt that feeling before, but it was only occasionally and almost as if by accident.

Congratulations for the good results you have had. You did very well at the Intensive Shaolin Kungfu Course in Penang in April 2008. The course acted as a key that opened the developments you already had from your previous training but were not manifested yet.

For example, the internal force you felt during the course was not developed at the course itself, but from your many years of previous training. This internal force, however, was locked in your tendons and muscles. At the course, I helped you to enter Zen, where you could be totally relaxed and attained a one-pointed mind. In this state of Zen, or chi kung state of mind, you let your internal force flow and manifest.

As another example, when you perform your own kungfu sets you learned before, you will find that now your performance is faster, smoother and more forceful. You will also have better insight into the patterns of the kungfu sets. You may also understand the combat functions of some of the patterns which previously you thought were only decorative.

With this new skills you learned at the course, you not only can manifest the developments you already had, but also speed up as well as expand whatever you learn in your kungfu training. For example, if you wish to learn a new kungfu set, you can do so in shorter time yet with better results. This is speeding up the ability you already had. Previously, you would feel tired after performing some kungfu movements, but now you would feel more fresh and energized. This is expanding your benefits which you did not have before.

Until this course, I only had slight awareness of my dan tian, but during the course I was aware of it often and even was able to feel chi moving down the front of my body and settling in my dan tian! How amazing it was!

This is another example of the course enhancing the result you already had. The dan tian is present in everybody, but most people are unaware of it. Kungfu practitioners are aware of it intellectually because it is often mentioned in kungfu context, but they seldom experience it because most of the time they are tensed physically and mentally.

But once awhile when their practice unconsciously brings them into a state of Zen, in which case they may experience their dan tian. But at the course you learned how to enter Zen at will. Hence, you were aware of your dan tian and other chi sensations.

While practicing One-Finger Shooting Zen today, I noticed that when I placed my awareness on my breathing, especially during the Shh and Haa sounds, it felt as if my breath was pushing and pulling my hand away from and toward my body. My hand felt very charged with internal force, and it seemed as though my breath and internal force (and not my arm muscles) are causing my hands to move. It felt very nice.

You attained what is described in kungfu classics as “mind directs chi, and chi directs forms”. This is high level attainment, usually achieved only by masters. It is incredible that many of our students achieved it. Those outside Shaolin Wahnam find it hard to believe that we can achieve such feats, and call us liars. That is their problem, not ours.

With further development of this skill, you can have many wonderful benefits. You can, for example, move at the speed of thought. If an opponent attacks you, you may just think that you would dodge and kick his side-ribs, and the action will be implemented so fast that even you yourself may be surprised. You would, however, still have to practice the technique before you can use it.

In other words, during your training you imagine an opponent attacking you. You move to one side and counter with a side-kick to his ribs. At first you practice this movement slowly and smoothly, paying attention to picture-perfect form and flowing force. Next, you increase you speed — without sacrificing your form and force. Then you just think about this counter and you will move spontaneously and quickly. When a real opponent attacks you, you just think of this counter and it will unfold itself effectively.

This skill can be beneficially used in our daily life — in both our work and play. If you wish to run up a flight of stairs, for example, just think and your mind will direct your chi, which will direct your feet to run up the stairs. You can reach many storeys above without feeling tired. In fact, participants at some Shaolin Kungfu courses at Swiss Inn in Sungai Petani did that. We started our practice in the morning beside the swimming pool. But when it got hotter, we ran up the stairs to a bigger hall to continue our practice. We ran up many flights of stairs but we were not tired.

When you play football or any games, you can be an exceptional player if you use this skill. You still need to practice the necessary techniques first. But when the situation arises, you just use your mind to direct your chi to direct your physical movements. Your opponents will be amazed.