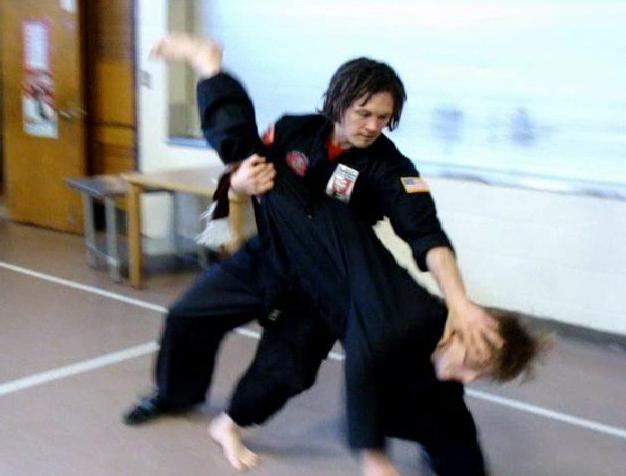 I have recently seen several different forum topics that have resulted in challenges being issued by my Shaolin Wahnam seniors as well as challenges being accepted by my seniors. I understand the reason, as all challenges I have seen have been a direct result of visitors to the forum directly insulting you and your teachings.

In particular the latest of the challenges you mentioned is in the Eagle Claw Master thread of our discussion forum. I have followed the thread closely and am very impressed with your observation that there are felling techniques hidden in Eagle Claw Sequence 2. Your observation confirms my belief that you and James probably know more of Eagle Claw combat than many Eagle Claw practitioners.

As I have also stated, this is no slight on Eagle Claw practitioners because the norm today is that most kungfu practitioners of any style only perform kungfu forms and have little or no experience of combat application. This is a main reason why kungfu today has been debased to such a pathetic level where even some masters fight like children or at best use Kick-Boxing when sparring with exponents of other martial systems.

I am pleasantly surprised that you could see in Sequence 2 hidden felling techniques. Not many kungfu exponents, including Eagle Claw practitioners, could see this. As I have not included felling techniques in the video clips I have prepared for Sequence 2, it will be very beneficial to our Shaolin Wahnam students as well as forum guests if you can describe them. This will also encourage them to take a more active part in the discussion on Eagle Claw application.

Yet, I am reminded of the story you told in “The Complete Book of Shaolin”, of Sigung talking you out of a challenge. A passage that sticks out for me is, “Then the question of defending your honor does not arise. As the accusation is false, there is no need for you to defend.”

I know you oversee the discussion forum and approve of the actions of the seniors. I am just confused. I, too, feel a strong desire to defend my Sifu when visitors directly toss insults, but it is due to the words in your book that I am reminded that these insults are hollow because they are based on false ideas and not the truth.

It is indeed a pity that instead of benefiting from our video presentation and be grateful for it, WongYing chose to attack and insult us.

Our position is very clear. We have great respect for Eagle Claw Kungfu. That is why we intend to have a special course on Eagle Claw at the UK Summer Camp this year so that our students as well as instructors have exposure to this great art. If WongYing or anybody interprets this as an insult to Eagle Claw practitioners, which was never intended to be in the first place, that is his problem, not ours.

Despite his having 26 years of Eagle Claw training, it is obvious to us that WongYing knows little, or nothing, about Eagle Claw combat application. He also knows little about Eagle Claw philosophy and could not answer your very appropriate and reasonable question as to why, according to his understanding, Sequence 1 is important in Eagle Claw Kungfu. Sadly, WongYing's case is typical of many kungfu practitioners today.

I do not like to use the word “stupid”, but it aptly describes WongYing's action in publicly calling my performance of Eagle Claw Sequences 1 and 2 “fa khuen sau thui”, which means “flowery fists and embroidery kicks” in Cantonese. In kungfu culture it is the worst of insults.

It is unthinkable for anyone to use it on a grandmaster of a school because it is issuing a challenge to the whole school. Personally, if someone calls my kungfu “fa khuen sau thui”, I would be amused, but when it applies to our whole school it becomes a serious matter. It is no surprise that so many of our instructors and students rise to the occasion and accept WongYing's challenge.

Our position on challenges is also very clear. We do not challenge others but if others challenge us, we take it seriously. We study the challenger and his challenge carefully and respond accordingly. So far, we have accepted every one of the challenges our distractors throw at us, and we are glad that without a single exception every challenger withdrew his challenge.

Mahmood issuing a challenge to Sanda Warrior, whom Mahmood rightly calls a Keyboard Warrior, is an exception, which we approve. Mahmood's action is due to his sense of righteousness and loyalty to our school. Not many people know that Mahmood was already a national Taekwondo champion before he learned from me, and since learning from me his combat efficiency has improved remarkably. I believe Mahmood would easily beat a keyboard warrior who dared not even give his real name.

The above is taken from Question 1 of April 2009 Part 1 of the Selection of Questions and Answers.