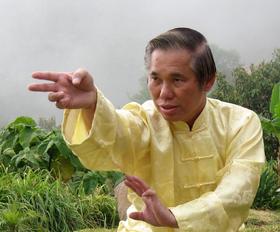 Sifu, Can you please tell me a bit more about the internal practice for the Five Animals? Do they have any specific practice? I understand that Leopard is speed, but is that external or internal?

I believe you are referring to the Five Animals in Shaolin Kungfu. There are also "five animals" in chi kung, which are the Tiger, the Bear, the Deer, the Bird and the Monkey, representing energy manifested from the lungs, the kidneys, the liver, the heart and the spleen. An example of chi kung exercise involving these five animals is the famous Hua Toa's Five-Animal Play

In Shaolin Kungfu, the "five animals" are the Dragon, the Snake, the Tiger, the Leopard and the Crane. We may look at the Shaolin Five Animals from two dimensions, the external and the internal. This is for convenience. In good kungfu, both the external and internal are integrated. Speed, for example, is both external and internal. Chi flow, which is internal, can result in tremendous speed, but we need to relax our muscles, which are considered external, to have smooth chi flow.

Externally, the "five animals" are represented by their hand forms and movements.

The Dragon is represented by the dragon-from, sometimes called Two-Finger Zen. One-Finger Zen and the open palm are also regarded as Dragon forms. The movements of the Dragon are fluid and circular. "Golden Dragon Plays with Water" is a characteristic Dragon pattern.

The Snake is represented by the open palm and the palm thrust. The movements of the Snake are also fluid but often straight. They are generally not as powerful as Dragon movements. A characteristic Snake pattern is "Poisonous Snake Shoots Venom".

How is it that the open palm can be a Dragon form and also a Snake Form. It is because kungfu, unlike science, is not rigid. Actually the form of the open palm for the Dragon and for the Snake is quite different. In the Dragon palm the fingers are usually apart, as in the dragon-claw palm and the Bagua palm, whereas in the Snake palm the fingers are usually close together, as in the willow-leaf palm. Nevertheless, the willow-leaf palm is also found in some Dragon patterns, like "Fierce Dragon Across Stream".

The Tiger is represented by the tiger-claw and the level punch. The movements are forceful and pressing. "Hungry Tiger Catches Goat" and "Black Tiger Steals Heart" are characteristic Tiger patterns.

The Leopard is represented by the leopard fist. Nevertheless, when the level punch is used with muscular strength, which is the case with most kungfu students today, instead of with internal force, we may classifiy it as a Leopard pattern. Leopard movements are fast, straight and powerful. "Golden Leopard Speeds through Forest:" is a characteristic Leopard pattern.

The Crane is represented by the crane-beak, extended arms as well as kicks. Crane movements are smooth and elegant. "White Crane Flaps Wings" is a characteristic Crane pattern.

Internally, the five animals are represented by their spirit, or mind, and energy dimensions.

The Dragon is represented by the presence of mind power as well as tremendous soft internal force. Every part of a Dragon master can be powerful. During the Advanced Shaolin-Taijiquan Course many years ago when you held me in a seemingly unbreakable lock, but I released it with a shake of my body, it was an example of applying the Dragon force. "Blue Dragon Emerges from Water" in the Taijiquan set "Flowing Water Floating Clouds", is an excellent pattern to manifest this type of force.

The Snake is represented by energy flow. A snake strike is soft, but can be more damaging than a hard strike from an Iron Palm. This is because it is not the physical strike itself, but the energy transmitted by the strike that hurts an opponent, like "Poisonous Snake Strikes Vital Point" in the Shaolin Five-Animal Set. But the energy can be consolidated into hard force, like "Poisonous Snake Shoots Venom" piercing an opponent's throat.

In kungfu classics, Tiger patterns are said to train bones. Many people, including advanced practitioners, take the term literally, thinking that Tiger training develops strong bones. "Bones" here refers to internal force. What the classic means is that Tiger patterns develop internal force. As in the case of the Smake, a Tiger strike may injure an opponent energetically, as in tiger claws gripping vital points, or it may injure him physically as in a Tiger level punch.

The Leopard is represented by speed and muscular strength, in contrast with the internal force of a Tiger. It is the most common characteristic of external kungfu and most other martial arts where speed and strength are key factors in combat. But big muscles are not favoured, as muscular mass slows down speed.

The Crane is represented by essence, which is a tricky word open to many interpretation and mis-interpretation, especially when it is translated into English and other languages and when the readers or listeners do not understand the naunces of the Chinese term. In Chinese context, essence means the best in its purest and simplest form. Hence, Crane patterns are characterized by cost-effectiveness, balance and elegance.

Much confusion can be overcome if one realizes that kungfu terms are unlike scientific terms. Kungfu terms are meant for convenience, and not as rigid definitions. When we refer to the Snake as represented by an open palm, for example, it does not means that Snake patterns cannot use other hand forms, or the open palm cannot be used by other Shaolin animals. When we say that the Leopard is characterized by speed and strength, it does not means that the Leopard does not have other qualities like mind power and internal force, or other Shaolin animals cannot have speed and strength.

Understanding the Shaolin five animals and their philosophy greatly enriches our kungfu performance. In our kungfu training, for example, we do not just be satisfied with just speed and strength, which many martial artists are mainly preoccupied with. We know that we can also develop other worthwhile qualities like mental clarity, elegance and energy flow.

More significantly we can apply these worthwhile qualities to enrich our daily life. If you find that you have been absent-minded or stressful, for example, you realize that you have neglected the training of mind, and thus you can pay more attention in your Dragon training. Other martial artists may not even have this realization in the first place, because the concept of the "five animals" is not found in their art. Even if they have the realization, they may not have the methods to train these qualities.