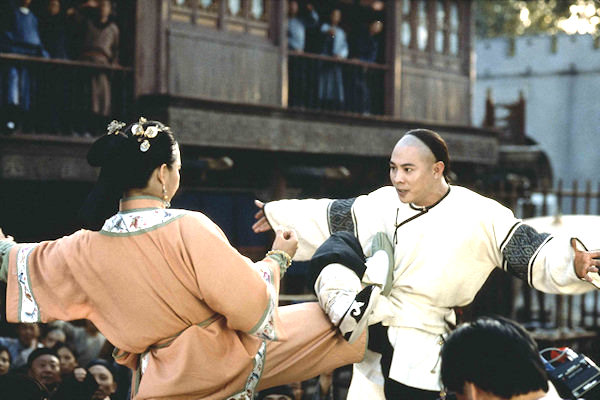 A picture from a movie showing Li Siu Wan executing a through-the-heart kick at Fong Sai Yuk, taken from http://www.kungfucinema.com/corey-yuens-fong-sai-yuk-returns-to-dvd-7584

Are there any interesting stories about your learning or teaching of chi flow?

My first encounter with the term chi flow was a Chinese kungfu story told by a famous Chinese story-teller called Li Tai Sor, broadcasted over Rediffusion, a local cable-network broadcasting service in Penang, Malaysia, when I was a small boy, of Foong Sai Yoke jumping up onto a lui-tai or high platform to fight with Looi the Tiger.

As Foong Sai Yoke landed on the high platform, he swayed gently in a famous Shaolin technique called Flowing Breeze Swaying Willows. It was only years later that I knew his was chi flow.

When I was learning Shaolin Kungfu from Sifu Ho Fatt Nam, I sometimes swayed after performing a kungfu set. It gave me a pleasant sensation and I felt charged with internal force. But my sifu discouraged me from going into vigorous chi flow.

Years later I had a rare opportunity to watch a video from China showing an old Shaolin master performing the famous Flower Set. Videos from China then were very rare, and anyone practicing traditional kungfu was rarer still. At the end of his performance, as he lowered his hands at his sides, he swayed gently like we do now. It then struck me that that was Flowing Breeze Swaying Willows.

The chi flow also made me bend my knees involuntarily into the Two-Character Stance, as chi sank into my dan tian. As the chi flow was very vigorous, I could not perform One-Finger Shooting Zen in picture-perfect form.

I recalled that when I learned the Flower Set from Uncle Righteousness, the force-training part of the set was performed in a Two-Character Stance. I was actually puzzled why the Two-Character Stance, and not the Horse-Riding Stance or the Goat Stance, was used, but as a good student I just practiced what my sifu taught. Then in a flash of inspiration, I linked these different images together meaningfully.

To facilitate chi flow, which was the ingredient for developing internal force, past masters stood upright when performing the required techniques, like One-Finger Shooting Zen and Single Dragon Emerges from Sea. When a lot of chi flow had been generated, the masters lowered themselves into a Two-Character Stance.

The chi flow at the Two-Character Stance was still too vigorous for the masters to perform the required techniques in picture-perfect form. So the Goat Stance or the Horse-Riding Stance was used to stabilize the chi flow movements so that the flowing chi can be more readily consolidated into internal force.

This procedural development from standing upright to Two-Character Stance, then to Goat Stance and Horse-Riding Stance in internal force training probably took place spontaneously over many centuries. In other words, those past masters involved in this development might not realize it.

The gradual changes or improvements were due to meeting expedient needs. It was likely that there were other changes too, but as these other changes were not useful they were logically dropped in the process. We just inherit the legacy of the past masters. Understanding the underlying philosophy enables us to be even more cost-effective.

There were some interesting stories in my teaching of chi flow. In my early years of teaching in Taiping, Malaysia, an elderly man who had such serious heart problem that he could not stand on his feet, came to me for healing. I had him seated on a chair, opened some of his energy points and helped him to have a chi flow.

Soon he could stand up supported by chi flow. Then his chi flow became vigorous. His family members repeatedly asked me whether it was safe for this elderly man with a serious heart problem to move so vigorously. I recalled reading in the classics that chi flow was safe, and I trusted the past masters. So I told his family members not to worry.

But actually I myself was quite worried. (At that time, I had not devised the three golden rules of practice, where the first rule was "Don't worry"!) What if he suddenly collapsed? As I was considering whether to ask him to slow down, I saw him smile. This confirmed for me that the chi flow was safe.

When he came out of chi flow, he told everybody present that that was one of the best times of his life. I also transmitted chi a few times from Sungai Petani to Taiping to help him. Soon he recovered.

On another occasion in Madrid, I helped a young man who had suffered from migraine for many years to have a chi flow. I noticed he had a blockage at the back of his head. I went behind him and gave him a hard slap on where the blockage was.

He started crying. His mother, who accompanied him, also cried after asking him why he cried. Douglas, who translated for us, asked the mother what the matter was. Douglas then told me that the young man cried for joy because his migraine which had troubled him for years disappeared after the slap. His mother also cried on hearing the good news.

The above is taken from Question 3 May 2013 Part 3 of the Selection of Questions and Answers.