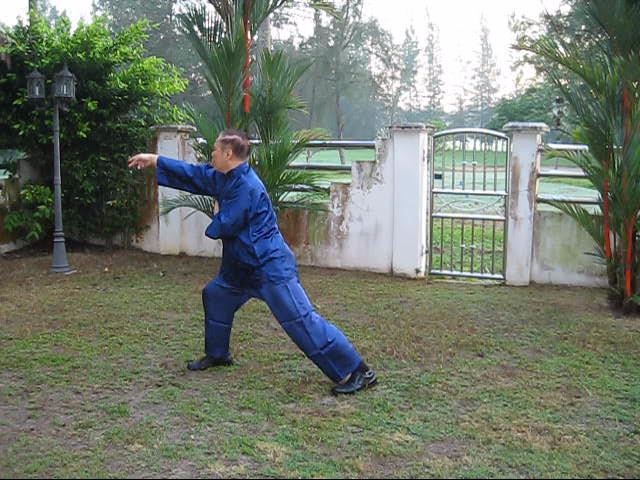 I am wondering if you can recommend a way that I can spend one year or more receiving very intensive traditional training in Taijiquan and Shaolin Kungfu. I am willing to devote all my time to work in exchange for this instruction.

Many people have asked me similar questions. The answers below provide some historical and philosophical background on the very intensive traditional training in Taijiquan and Shaolin Kungfu offered by me.

Spending many years with a master was the traditional way in the past to practise kungfu (which of course included Taijiquan). The student served and worked for the master, who in turn taught the student without charging any fees. The master normally had just one, or the most a few students.

The onus was not learning but practising. Hence, your idea of spending one year to receive very intensive training does not apply. The master would teach the student a technique, and the student would practise it for many months before another technique would be taught. The training was usually very demanding, and to the uninitiated might not appear relevant.

Or the master might ask the student to catch fish swimming in a stream, and place them in a basin of water, giving clear instruction that the fish must not be hurt. If the student caught no fish, or hurt any fish, the master might hit him, scolding him for being useless or cruel.

When the basin was quite full of fish, the master would pour the fish back to the stream. If the student asked why, the master might say he loved it that way, or he might order the student to shut up and do what was told. Later the student would be grateful to his master when his arms were powerful, his eyesight sharp, and he could grip an opponent with ease.

Later, as times and situations changed, kungfu schools were popular. The master usually had many students, who paid fees and attended regular classes. But the master seldom taught the classes, and his students seldom learned! Then, what did they do? Why did they pay fees? They practised in the classes under the supervision of senior students.

This was the norm in kungfu training at the end of the Chinese dynastic era at the beginning of the 20th century, when kungfu was still a martial art. A kungfu student might not know much about kungfu theory, much less than what a modern kungfu dancer today knows, but he was an efficient fighter.

It was in the 20th century that kungfu deteriorated from a martial art into gymnastics and dance. There was a shift of emphasis from practising to learning, and from force training and combat application to routine sets. When kungfu was a martial art, the emphasis was training force and practising combat application. Now when kungfu is gymnastics or dance, the emphasis is learning routine sets.

As times and situations change, the best mode of training changes accordingly. For our present time and situation I believe my intensive courses are the best mode to provide deserving students an opportunity to learn and practise genuine Taijiquan and genuine Shaolin Kungfu (in contrast to Taiji dance and Shaolin gymnastics). The emphasis in the intensive courses is on force training and combat application. The courses are very intensive, and you must be ready to work very hard.

The above is taken from Question 9 of April 2001 Part 3 of the Selection of Questions and Answers.