DOES XINGYIQUAN BELONG TO SHAOLIN OR WUDANG? 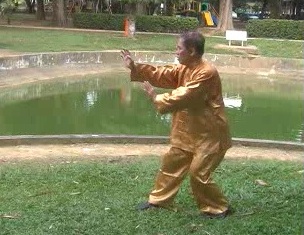 I read from your webpage that Xingyiquan was invented by Yue Fei who was a Shaolin master. This means Xingyiquan belongs to Shaolin Kungfu.

Can you please explain?

Many people, including many kungfu practitioners, even some masters, classify all styles of kungfu into Shaolin and Wudang. According to this classification, Shaolin Kungfu is hard and external, whereas Wudang Kungfu is soft and internal. Taijiquan, Baguazhang and Xingyiquan are internal arts, and they belong to the Wudang group. All other kungfu styles belong to the Shaolin group.

This classification was originated by a Chinese scholar in the 20th century who wrote a treatise on "A Study of Shaolin and Wudang". I have a copy of this treatise. This classification is incorrect, but has been established and is popularly used by many people, often without understanding its meaning.

A few Chinese terms that have been well established belong to this situation. They are incorrect, but have been established as if they were facts. Two infamous examples are "Yin-Yang" and "Five Elements".

It is commonly said, even by otherwise authorities, that yin and yang are two primordial forces of the universe. Yin and Yang are not primordial, and they are not forces. They are just symbols representing two complementary aspects of any thing. A woman, for example, is referred to as yin, when she is compared with a man, and the comparison is usually not openly stated; it is understood. If we compare the strength of a woman who is strong, with a man who is week, the woman would be yang and the man yin.

It is commonly said that the Chinese regard all things in the world to be made up of five elements. This is incorrect, and the mistake is due to a wrong translation which has become established. The Chinese realize that there are countless processes in the world, and all these countless processes can be classified into five archetypes called "wu xing", which means "five movements" or "five processes", but the term has been wrongly translated as "five elements".

Of the three internal arts, Xingyiquan is the one that has no connection with Wudang. It is also the one that is directly developed from Shaolin Kungfu by the great Song marshal, Yue Fe, in the 12th century.

Taijiquan was evolved from Shaolin Kungfu by Zhang San Feng, who developed the art on Wudang Mountain. It was initially called Wudang Shaolin Kungfu, but later shortened to Wudang Kungfu.

It is generally accepted that the First Patriarch of Baguazhang was Dong Hai Chuan who lived in the 19th century. He was well versed in Shaolin Kungfu and developed Baguazhang after learning from two unnamed Taoist saints on Hua Mountain. There was no connection with the Wudang Mountain. But a lot of Baguazhang philosophy is described in Taoist terms, and Wudang Mountain is famous for Taoist cultivation.

While it is internal, Xingyiquan is relatively hard. It does not resemble the soft image of Wudang Kungfu many people have in this mistaken classification. If Xingyiquan were to be performed to a group of people, without telling them it was Xingyiquan and they were asked to guess whether it was Shaolin or Wudang Kungfu, it was likely that many would call it Shaolin, which is correct. In fact, the term "Shaolin" is sometimes prefixed to "Xingyiquan", calling it Shaolin Xingyiquan, but never Wudang Xingyiquan.

The above is taken from Question 8 August 2015 Part 1 of the Selection of Questions and Answers.