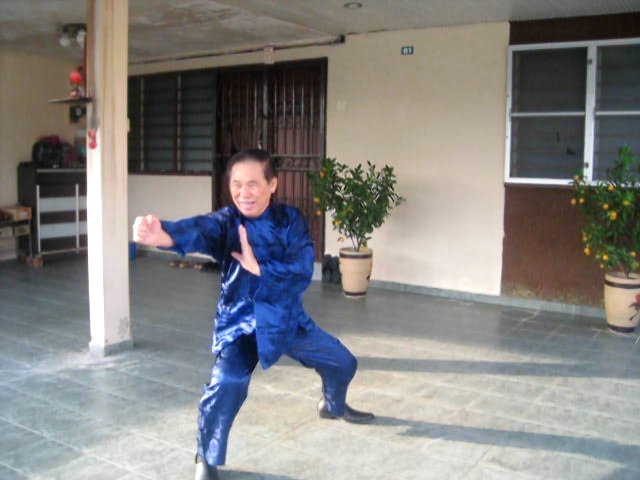 As proof of their true inefficiency, I was told that this is because they only seem to spar using san shou skills. As far as I can make out, real fights do not play out in a sequence. There are no stances. Things are too quick to spring into a nice stance all the time. Real combat is completely unlike choreographed sequences so entirely warped by the movies.

Embarrassed by criticisms that their wushu cannot be used for combat, wushu masters in China incorporated san shou into their repertoire. Accordingly, Shaolin monks at the Shaolin Temple in Chna, who practiced wushu, also experimented with san shou. They then planned an international san shou competition with the intention to show that wushu can be used for fighting. I know this quite well because one of my students was actually involved in its preparation.

This happened many years ago, probably even before the present generation of Shaolin monks began to learn wushu. My student was a master in his own right, and this occurred before he learned Shaolin Kungfu from me. At that time he was staying in China working on his master's degree, and his topic was Shaolin Kungfu. (Now he has completed his doctorate degree.) He was the only foreigner in the preparation, for two reasons. One, he very easily beat the best Shaolin monks in sparring. Two, he was a good source to obtain outside information on sparring competitions.

What the Shaolin monks practiced for the san shou competition was not techniques from Shaolin Kungfu, not even from wushu, but from Western Boxing, and the standard was low. My student advised the monks against holding the competition, saying the standard of sparring outside China was much higher. But preparation had gone too far ahead for cancellation. The competition was held, and was a disaster for the Shaolin monks.

By now the standard of san shou, using boxing and kickboxing techniques, have improved vastly amongst some current Shaolin monks. Recently I saw a video showing a well known Shaolin monk exhibiting san shou techniques. His punches and kicks were fast and impressive, but they were boxing and kickboxing techniques. There was not a single pattern from the wushu, or kungfu as he called it, he taught.

There is no doubt that Shaolin techniques can be effectively used for sparring or real fighting, though not many people today can do so. I speak with conviction because my masters did so, I myself did so, and many of my students are doing so. And stances are very, very important. Looking back at the many sparring sessions and a few real fights in my younger days, I would say that the most crucial factor enabling me to come out of combat unhurt was my stances!

If you were at my recent chi kung courses in Brighton, you would have seen typical Shaolin and Taijiquan techniques in combat. A photographer from a kungfu magazine wished to take some photographs for illustration of kungfu combat. My students posed for the photographs. It was impromptu. There was no pre-arrangement, no choreographed sequences. One student attacked and another responded spontaneously using typical Shaolin or Taijiquan patterns. Then they recalled the impromptu combat sequences they used, pattern by pattern, for the photographer.

Incidentally the example of Ronan in the photograph taking (on another day) demonstrated how easily my students went into their stances in free sparring. Before he learned Shaolin Kungfu from me, Ronan was a boxer. I asked Ronan to pose as a boxer and attack me, as I wished to illustrate, in response to a reader's question in my Q-A series, how one could effectively use Shaolin Kungfu against Western Boxing. As Dan correctly said, after about a year of systematic training, they (including Ronan) could no longer fight without naturally going into their stances. As Ronan went into his stances spontaneously, his footwork was so unlike that of a boxer that I had to ask Darryl to substitute him!

My Shifu, (a modern Shaolin monk) says that “freestyle fighting” is the 'heart' of Shaolin Kungfu. I haven't progressed too far in the Temple yet, but from what I know the techniques are taken from the forms. Very few are taught, but they are studied in great detail, and used in the “freestyle” combat. It is not the forms themselves that are the fight. There is no guaranteed form of attack for any fight. Do you have any opinions on this?

Yours is a very common case because employing kungfu patterns for real combat or free sparring is so rare today. This is because the essence of kungfu has been generally lost, those who can still fight or spar using kungfu patterns are the exception. But when Shaolin monks or other masters themselves advocate that "freestyle fighting is the heart of Shaolin Kungfu”, it becomes alarming. It sounds the warning that if nothing is done, genuine Shaolin Kungfu will be lost forever within the next two generations.

Freestyle fighting may be the heart of modernized wushu because its exponents do not know how to fight using the patterns they perform in solo, but it is certainly not in genuine Shaolin Kungfu, or any genuine kungfu. Just a quick look at any kungfu literature or illustration will show that kungfu masters in the past used kungfu skills and techniques in combat.

Very fortunately, the gigantic murals in the White Robe Hall of the Shaolin Temple in China still stands. The gigantic murals are testimony to the kind of Shaolin Kungfu practiced during the Ming Dynasty, which was between four to seven hundred years ago. They show Shaolin monks sparring, and they used Shaolin patterns, like the ones kungfu and wushu exponents practice today.

Unless the person in question is ignorant, to advocate that freestyle fighting is the heart of Shaolin Kungfu is to imply that all the past masters who said they used kungfu patterns in combat were liars, or all those who practice kungfu patterns for combat today are fools.

If you wish to use your kungfu or wushu techniques for combat, you just have to learn and practice doing so methodically. If you go straight to free sparring immediately after form training, you will fight freestyle, which is another way of saying you will fight like children.

If you train punching and kicking methodically, like what some current Shaolin monks do, and use them in combat, you will not fight freestyle; you will fight like boxers or kickboxers.

If you have been methodically trained to spar using kungfu patterns, when an opponent attacks you, irrespective of whether he uses kungfu forms or any other martial art forms or use freestyle, you will spontaneously respond with the kungfu patterns that you have been trained in. You will not need to think what pattern to use, or what stance to jump into; you will just respond correctly and spontaneously.

The above is taken from Questions 3-4 of January 2003 Part 2 of the Selection of Questions and Answers.