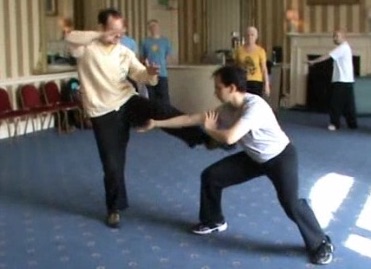 I've been studying Aikido for about six to seven years (averaging an hour a day) and according to my limited exposure it appears that many Baguazhang techniques are similar to Aikido in application. In a pinch I resort to employing Baguazhang techniques using Aikido principles. I do not know if this is the correct approach. How can I train Baguazhang as a martial art?

No, Aikido and Baguazhang are very different in both principles and techniques. The apparent similarity is that both arts use circular movements, but deeper examination will show that they are different.

If an assailant attacks with a dagger thrust, for example, an Aikido exponent would side step, grip the assailant's attacking wrist with both hands, move back slightly to follow the attacking momentum, then bend the wrist backward in an arc to dislocate it.

A typical response form a Baguazhang exponent is totally different. He would not move his feet, but swerve his body in an arc to avoid the dagger thrust, and simultaneously use Single Change Palm (similar to the mirror-hand in Shaolin Kungfu and the “peng” technique in Taijiquan) to deflect the direction of the attack, continue the same movement with a palm strike at close quarters at the assailant's chest.

In the different responses to the same attack, the Aikido exponent would need three movements using leverage to dislocate the assailant's wrist, whereas the Baguazhang exponent uses just one movement to kill or seriously injure the assailant with internal force. Aikido is a sport, whereas Baguazhang is a deadly fighting art.

The above is taken from Question 4 of June 2004 Part 3 of the Selection of Questions and Answers.