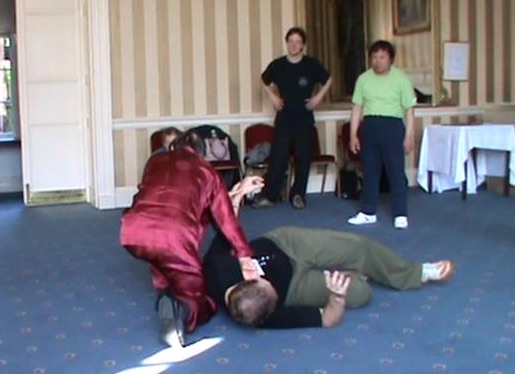 I read your sample weekly training timetable for training Taijiquan as a martial art in your latest selection of questions and answers, February 2004 (Part 3). I was wondering if you could please suggest a similar programme for Baguazhang. -- Leong, Australia

You can use the same three programmes but substituting Baguazhang techniques for Taijiquan techniques.

But I shall give you another training programme from a different perspective. This programme is for dedicated Baguazhang practitioners who are willing to work hard.

Allot about 5% of your training time for form practice. As mentioned in the other three programmes, when you use forms to develop internal force, to practice combat application, or to apply certain principles, such training is not counted as form practice.

A special feature of Baguazhang is that originally there were no kungfu sets! There were eight fundamental palm movements, each with eight variations, making a total of sixty four fundamental sequences. However, for the sake of their students, some Baguazhang masters later combined these sequences in different order, or composed new sequences into Baguazhang sets. The two most famous sets are “Swimming Dragon Bagua Palm” and “Bagua Circulating-Body Palm”, both of which have a few versions.

If you have a Baguazhang set, perform it for form practice, otherwise perform various Baguazhang sequences. The main objectives are to have correct forms spontaneously so that you can derive the best technical advantages from the forms, and to move from one form to another fluidly.

Allot about 15% of your training time for philosophical studies. Read up good literature on Baguazhang, as well as distinguish the rubbish from the valuable. For example, a Western Baguazhang master in recent times converted the traditional circular movements in Baguazhang into linear movements in his self-invented style. Do you think it is an improvement or a degradation?

The above is taken from Question 3 of June 2004 Part 3 of the Selection of Questions and Answers.