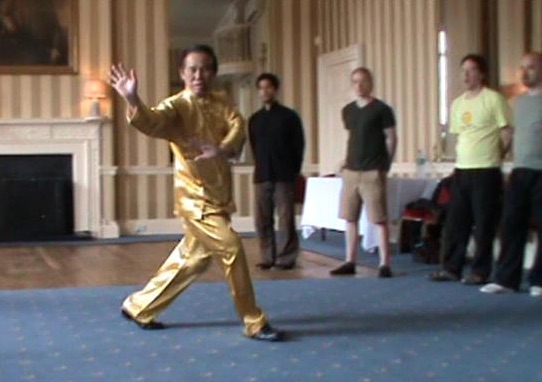 My primary Baguazhang training is standing at the Single Change Palm posture for about two minutes each side (alternating with Santi on other days), half an hour of slow “circle walking” gently getting my waist to twist as far as it comfortably can towards the centre of the circle, a hundred slow repetitions of “chuan zhang” (piercing palm) and “ta zhang” on each side (especially the left), gently thinking of the fingertips (for chuan zhang) and palms (for ta zhang) softly pushing the air away from my body as I extend the palms from the waist. I dare not train the palm exercises as “fajing” drills until my shoulder completely recovers.

Except for the lack of combat application, the content of your training is good. But the problem is not the content but the methodology. In other words it is not “what” you train but “how” you train that is crucial for your progress. Basically you practice Baguazhang as an external exercise rather than an internal art.

How do I know when I have not seen your training? Actually it is very simple. Had you trained Baguazhang as an internal art, you would not have raised the issues you did, and you would also have recovered from your shoulder injury.

It is difficult to learn the methodology of internal training from written instructions. What I describe in words is also probably what you have been doing technically, but not skillfully. It is best if you attend my Intensive Taijiquan Course. You will then learn the skills of internal training which you can transfer to Baguazhang. However, the problem is that now I am not offering this Intensive Taijiquan Course, unless there are sufficient people who want it.

You can attend my Intensive Shaolin Kungfu Course. The skills in internal training are similar, though the technical methods are different. For example, you can use the same skills you learn in Golden Bridge in Shaolin Kungfu to apply to Santi Stance or Single Change Palm in Baguazhang. I would like you to learn the necessary skills, then use them in Baguazhang, train hard to become a master and promote Baguazhang as a great internal martial art. It would be a great pity if it is lost to humanity.

Alternatively you can contact my disciple, Jeffrey Segal, who will teach Wahnam Taijiquan in Melbourne, and arrange some training sessions with him. Right now he is traveling over Asia to gain experience. You can check up his e-mail address in the Shaolin Wahnam Discussion Forum. You can be sure that he will be glad to help you. It is our Shaolin Wahnam policy to help deserving seekers to preserve genuine kungfu, irrespective of whether they practice our Shaolin Wahnam arts.

Nevertheless, I shall briefly describe how you should approach internal training. There are three crucial points, or secrets, as follows.

If you succeed in “Flowing Breeze and Swaying Willows” explained in Answer 4 of Questions-Answers Series June 2004 Part 2, you will have an excellent introduction to internal force training. It will give you an idea how you should train, even though the techniques may be different.

I would suggest you cut your “circle walking” from half an hour to just five minutes. What you did was half an hour of mechanical walking. Now practice five minutes of chi kung walking. Put into practice the three crucial points I mentioned above. For example, when you move a foot, do not use muscular strength. At advanced levels, practitioners use their mind to move their energy to move their foot. You would not be able to do this yet. A simpler method is to move your foot as if effortlessly.

When you settle into your stance after moving your foot, you should not feel any muscular tension, especially at your calves. You settle down not because you physically lower your body but because your chi settles at your dan tian, similar to what you did in your stance training. This will be difficult at first. But if you know what to do and practice diligently, you will eventually attain the skills.

I would suggest postponing your “chuan zhang” (piercing palm) and “ta zhang” (striking palm) training until you have developed sufficient internal force at your dan tian. You should also not train “fajing” (exploding force) now, not just because of your shoulder injury, but because there is not much internal force at your dan tian at present for you to explode to your palms.

You should focus on zhan zhuang to develop internal force. You should gradually increase your zhan zhuang from about two minutes to fifteen minutes or more. I am going to give you a Baguazhang secret that many Baguazhang practitioners today may not know. The most important stances for zhan zhuang in Baguazhang are the eight Bagua Palm postures.

You start with Single Change Palm. When you cannot stand at the stance further, move to Double Change Palm, and so on until you complete all the eight postures. It is walking the Bagua circle in stance forms.

Stance training will give you solidness and internal force. But you must not neglect agility, for which Baguazhang is famous. I am going to give you another secret, the secret of agility training in Baguazhang.

Move from one stance form to another without stopping to complete the eight Bagua Palm postures. Your forms must be correct, and your movements must be fluid and elegant. You should not use your muscles to move. Then, how do you move? Use your mind to move your energy to move your forms. As mentioned earlier, you would probably be unable to do this yet. A simpler method is to move without any effort.

At first do not worry about speed. Move leisurely and effortlessly in a chi kung state of mind. Remember that you must not use any muscular strength. But your forms must be correct, and your movement fluid and elegant. Initially you may take a few minutes to complete one circle. Gradually increase your speed so that you can do so flowingly and elegantly in a few seconds. You may introduce variations in your circle walking, such as changing from right to left mode, changing directions, or changing the order of the stance forms.

When you can perform this Bagua circle walking exercise quite well, which will take at least a few months, you can progress to another agility exercise, which is similar to the “Art of Going through Woods” described in my book, “The Complete Book of Shaolin”. In the past, Baguazhang practitioners used poles driven into the ground for this exercise. But this may not be feasible in today's society.

An alternative is to place inverted bowls in a plum flower position or in a bagua (octagonal) position. Move about agilely and elegantly using the eight Bagua Palm forms or other Baguazhang patterns in between the bowls without touching the bowls. Your movements must be both agile and forceful — using internal force and not muscular strength.

Because the standard of kungfu today is so low, if you train daily for three years you would attain a standard of force or skills that surpass those of many “masters” today. But you still cannot fight effectively because you have not practiced combat application. In Chinese terms, you have “gong” (force) but not “yong” (application). To be proficient in “yong' or combat application, you have to see me for practical explanation or wait for my illustration in my webpages. Then you have to practice, practice and practice with a sparring partner.

The above is taken from Question 2 of June 2004 Part 3 of the Selection of Questions and Answers.