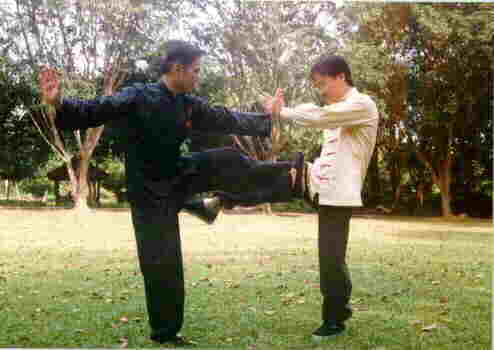 A thrust kick against a round-house kick

Are roundhouse kicks, hooks and all such following free attacks found in traditional kung fu as well?

Some of these attacks are not found in some styles of kungfu. It is not because the kungfu practitioners do not know them, but because these techniques contain innate weaknesses that make their application in combat disadvantageous.

The practitioner who practices Wing Choon Kungfu, which was invented by an elegant, graceful lady, would not block the roundhouse kicks. But as soon as the attacker kicks, he will find his knee being fractured, his groin being hit, this throat being pierced, or his head being struck from behind.

But all attack and defence techniques in all martial arts, including shoots, take-downs, pin-downs, grabbling, sophisticated locks and throws, are found in Shaolin Kungfu.

Because it is a basic for every art, and I have read about Shaolin san shou where the san shou is called sanda after it is made a sports version but the original sanshou came after studying techniques from Bagua, Taichi, Drunken Boxing, Praying Mantis, Xingyi, Choy Li Fut, Hoong Kuen, Tiger, Monkey etc. I'm sure every style has these hooks, roundhouse kick, etc. types of free techniques.

San-shou and san-da are not modern inventions. They have been in traditional kungfu for centuries.

Technically san-shou and san-da are different, though some people use the two terms interchangeably.

San-shou means miscellaneous techniques. It refers to using specific counters against specific attacks. If a Muay Thai fighter executes a powerful right sweeping kick at your left ribs, for example, if you practice Monkey Style Kungfu, you will move diagonally forward to your right, squat down and grip your opponent's groin with your left monkey paw using the pattern "Monkey Steals Peach".

If you practice Taijiquan, you will probably use a different counter against the same attack. You step diagonally to your right and kick your opponent's groin with a left thrust kick using the pattern "Cross-Hand Thrust-Kick".

Hence, "Monkey Steals Peach" is a Monkey Style Kungfu san-shou, and "Cross-Hand Thrust-Kick" is a Taijiquan san-shou against a Muay Thai sweeping kick. In either case the kungfu exponent disables the Muay thai fighter as soon as he attacks. And you don't need to make your legs hard to do so.