THROUGH VIDEOS AND LEARN KUNGFU 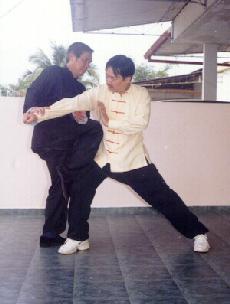 Just a side issue here, for the meantime are you considering transmitting your art through video tapes or other forms?

No. All the time I have said that unless one is already familiar with the art, learning from video tapes or other forms of multi-media merely enables him (or her) to learn the outward forms. I do not want to teach dance or gymnastics.

If a person feels that an art is worthy of learning, he should at the least learn it the right way. It is a fact, although many people choose to ignore it, that real kungfu or qigong was rare, is rare and will be rare. If someone feels it too much a trouble to seek a master, that someone does not deserve to learn and derive the wonderful benefits of a great art.

I understand that you wrote about the missing steps between general Chinese martial arts training and the sparring and application. Also there is only a very limited description of various chuan and chigong in the Shaolin book that you have written. I know that the health aspect is more useful to the general public but I think it would be a great loss to our culture if the precious training is lost in future generations. The world is waiting for your future teaching/publications!

This is in line with my philosophy that one should learn (and experience) the essence of kungfu, and not just its outward forms. Had I described a lot of chuan, or kungfu sets, and qigong exercises, I would have contradicted this philosophy.

Actually there are quite a lot of forms explained in my book, "The Art of Shaolin Kungf Fu". The difference with many other kungfu books is that besides showing the forms, I have explained and emphasized their inner significance. As a reader has put it quite nicely, in most kungfu books, you find forms from the first page to the last page; in my book you don't find any forms until you have read many pages.

Moreover, I also explain and show you how you can compose your own chuan or kungfu sets, and suggest some principles to use in your set composition. Once you can do this, you can virtually pick up any forms or sets shown in many other kungfu books.

But even if you can perform well just a portion of the forms explained in my book, and also incorporate their inner significance such as force training, combat application and philosophical considerations, you can attain a master's level.

While the health aspect is important, I have also emphasized in this book, as well as in my other kungfu book, "Introduction to Shaolin Kungfu", that the fundamental objective of kungfu, any kungfu including Taijiquan, is combat efficiency. If one cannot defend himself, then what he practises is just kungfu gymnastics or dance, no matter how well known his art or teacher is. Yet, the greatest aim of great kungfu, like Shaolin Kungfu and Taijiquan, is not combat efficiency, not even health promotion, but spiritual development.