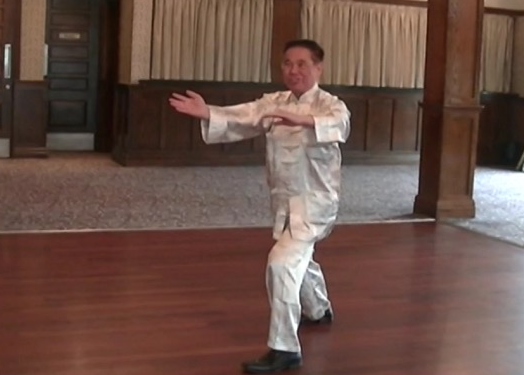 How does practicing the Shaolin Pakua Set enable you to have an "enlightenment in kungfu combat application"?

As you and many others know very well, it was the Shaolin Pakua Set I learned from my sifu, Sifu Ho Fatt Nam, that gave me an "enlightenment in kungfu combat". Before this, my kungfu combat was simplistic, like using "Single Tiger Emerges from Cave" to defend against a side kick.

The Shaolin Pakua Set opened a new vantage of combat application. I learned, for example, that when someone gave me a side kick, I could avoid his kick and simultaneously catch his leg, and then throw him off if I want to be merciful, or kick his groin with my toes if I want to be drastic.

I also learned tactics. I could, for example, execute a double punch to let an opponent grip my arms, then release the grip and strike the opponent at his solar plexus. I learned this the hard way, i.e. before I had learnt the tactic, I was put out of action for 6 months by my siheng who applied this tactic from the Pakua Set.

I also learned strategies from the set. I would let my opponent attack me, and then retreat with a tiger-tail kick, then a jumping thrust kick, and catching his hand and sending a punch at his ribs, using "Lazy Tiger Stretches Waist", "White Horse Presents Hoof", and "General Leads Horse".

We shall learn all these at the coming Pakua Set course. We shall not only learn the techniques for combat, but also tactics and strategies. It is mind-blowing to know that we can learn all these in 3 days when most other practitioners would take many months just to learn the routine of the set, and many years to have just some understanding of the combat application of a few simple patterns. (This question was asked before the Pakua Course in Ireland in February 2018.)

The above is taken from Question 7 May 2019 Part 1 of the Selection of Questions and Answers.