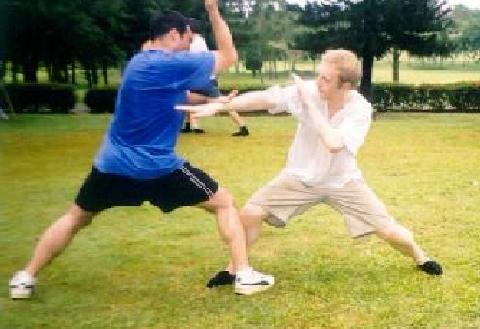 Combat application is an essential aspect in traditional kungfu training

It's so true that people who learn kung fu tend to fight like children in a haphazard way using very little of what they've practiced. I hope that I will be able to achieve the level where I'd be able to fight using kung fu and not some borrowed moves.

Kungfu practitioners fighting like children is now the norm, and has become a laughing stock among martial artists of other systems. The main fault is that the methodology to teach kungfu practitioners progress from solo form practice to free sparring is now generally lost.

Some masters attempted to overcome this shameful situation. Their main approach was to borrow training methods from other martial arts, particularly from Karate and Taekwondo. Some did very well and their students became good fighters. An outstanding example was Bruce Lee. But the fact remained that they did not employ typical kungfu forms for fighting.

Today a serious problem is emerging. Some world known Shaolin and Taijiquan masters even go to the extent of publicly saying that traditional kungfu forms cannot be used for fighting! What they use and teach for combat is Boxing, Kickboxing, Karate, Taekwondo or freestyle fighting. You may find their views and pictures in their official websites. Traditional kungfu forms, they insist, are meant only for teaching certain combat principles or for strengthening the practitioners' legs.

This is shocking. It is also a great insult to generations of masters in their own lineages who had demonstrated in texts and pictures that the traditional kungfu forms the masters taught were combat efficient.

Against such a varied background, my website, books and the intensive courses I offer the public are a sincere attempt to check the fast deterioration of kungfu and chi kung. My effort is only a ripple in an ocean but at least the wonderful arts that my masters so kindly and generously transmitted to me, can be passed down to some deserving disciples.

The above is taken from Question 6 July 2003 Part 3 of the Selection of Questions and Answers.