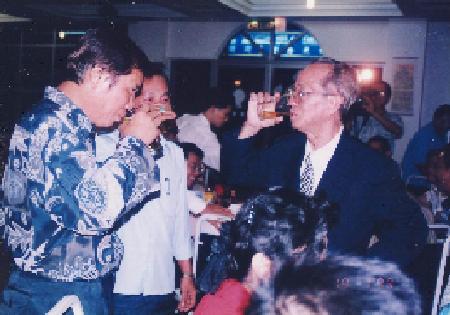 My sifu also did not teach me Zen or Tao formally, though he himself was a great Zen and Taoist grandmaster. This was because I went to him for kungfu training, and not for Zen or Tao training. Nevertheless, I learned and benefited a lot from him informally in Zen and Tao cultivation. Such informal lessons were mainly from examples of his daily living as well as conversations over tea or meals.

For example, and this actually happened, when he found that my kungfu movements were staccato, he did not give a long discourse on how and why kungfu movements should be flowing, he just told me to perform the patterns in a sequence instead of individually. When he found I lacked force in my punches, he did not explain different ways of force training, he just told me to practice "Thirty Punches" using stone-locks. His instructions were simple, direct and effective -- the hallmarks of Zen.

My sifu and I did not talk about Zen or Tao; we practiced it. For example, we did not discuss the concept of non-thought, but he taught me to be relaxed and to clear my mind of all thoughts in my kungfu and chi kung training. He did not philosophize on the importance of morality, but demonstrated high moral values in his daily living.

The main method for spiritual cultivation he taught me was bafflingly simple. He just told me to sit silently in a lotus position, do nothing and think of nothing. He did not even demonstrate the method to me; he just described it. He also did not say it was for spiritual cultivation. But as a good student, I followed his instruction faithfully. It was many years later that I had my first spiritual awakening.

By comparison students today in Shaolin Wahnam are extremely lucky. They have proven, effective methods systematically taught to them. They know exactly what they are doing and what attainments they can expect to have. In the recent Intensive Chi Kung Course (8th to 12th October 2011) in Sabah, for example, more than 60% of the class of 38 people experienced their spirit expanding beyond their physical body. It was simply incredible but true that they achieved in a few days what it took me many years to achieve!

The above is taken from Question 2 August 2012 Part 1 of the Selection of Questions and Answers.