THE DIFFERENCE BETWEEN TAIJI DANCE AND TAIJIQUAN 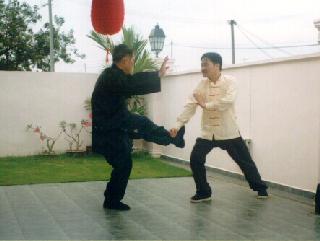 I bought a tape call “Tai Chi for Health” and started practising. At that time the only thing I knew about Tai Chi was that it was good for health and also it calms you down. Now I know it is a martial art, but I have never seen any applications of it.

The correct term is Tai Chi Chuan, or Taijiquan in Romanised Chinese. Tai Chi Chuan is a martial art, but today it has degenerated into a form of gentle exercise or dance. In this debased form, it is often called Tai Chi by many people, especially by those who do not even know it is actually a martial art.

Tai Chi dancers have such benefits like relaxation, loosening of muscles, and graceful movements. These benefits are nice, but they are nothing when compared to the great benefits enjoyed by Taijiquan martial artists.

Most people, including most Tai Chi dancers all over the world, have never seen combat applications of Taijiquan because genuine Taijiquan is very rare today. Even in China what is practised is usually Tai Chi dance. My Intensive Taijiquan Course is an attempt to preserve the wonders of Taijiquan as a martial art.

I know that a tape is no substitute for a good teacher but Tai Chi schools are far away from my house, and I could only go on Saturdays if I want to take classes. Do you think I can learn something with the tapes? I know that later I have to find a good teacher.

But before you can find a genuine Taijiquan master who is willing to teach you, it is recommendable to acquaint yourself with the external form first. Learning from tapes will then be useful.

Probably the Tai Chi schools you mentioned teach only Tai Chi external form. But if they teach genuine Taijiquan, it is worth your time and effort to learn from them. One thing you must be very clear about. If you want to learn Taijiquan, you have to put in a lot of time and effort; otherwise you have to be contented with Tai Chi dance.

I have downloaded some applications of Tai Chi techniques or movements from the short form of the Yang style.

Like internal force training which involves the training of energy and mind, combat application needs to be taught by a master. You may know how to perform the methods which you may read from a book, but you may still have no internal force. Similarly, you may know how to perform the techniques which you may copy from a videotape, but you may still be unable to overcome an opponent.

Even for techniques, combat situations are so varied and changing that individual coaching is usually necessary. For example, in the “Golden Cockerel” pattern against a knee strike, how you hold up your hands, raise your knee or position you standing foot varies according to different opponents and conditions. There is so much variation and so many possibilities that it is not possible to mention all of them in a book.

Would a master be able to teach all these variations and possibilities? He does not have to. By teaching a selected few, a master would be able to inculcate the underlying principle which will enable the student to know what to do in different situations.

Can this be done through books, webpages or videotapes? No, such teaching is too subtle to be satisfactorily expressed in words, it has to be demonstrated by the master and experienced directly by the student. For example, the master may say, “Apply this amount of force.” How would you express correctly “this amount” in words?

Hence, at best you may be able to perform the downloaded techniques, even beautifully, in solo demonstration. If you are contented to perform them as Taiji dance, that is fine. But you will be unable to apply them in combat, which is the real objective of the techniques.

However, if you are trained in genuine Taijiquan, like those who have attended my Intensive Taijiquan Course, then the techniques learnt from books, wehpages and videotapes will be very useful.

Is it true that for one movement like, for example, “Single Whip”, can be applied for different situations?

Yes, it is true, if you learn genuine Taijiquan. The “Single Whip”, for example, can be used to strike an opponent, to break his arm, to dislocate his wrist, to release a hold, to stop his kicks, or to neutralize his throws.

The above is taken from Questions 1-4 of May 2001 Part 1 of the Selection of Questions and Answers.