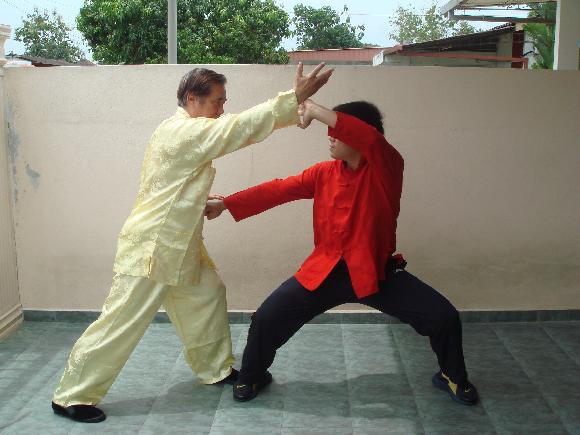 Anyway, this confuses me since I believe in your method. I believe in the master, so I would expect the students to be better. I would like to ask you how many of your students are efficient in combat? I could define 3 three levels here: first being able to defend against a non-martial artist, then a common martial artist of another art and then an exponent of other martial arts.

I like your questions. They touch on delicate issues but you ask them sincerely and respectfully. I shall answer them honestly, as I have always been doing, although I suspect those who have been critical of us, like those kungfu practitioners who favoure Kick-Boxing techniques to kungfu techniques in their sparring, and those who do not believe in internal force, may doubt my answers.

All Shaolin Wahnam students who have practiced kungfu with us (Shaolin or Taijiquan) for more than six months would be competent to defend against opponents who have not practiced any martial arts.

Shaolin Wahnam students who have practiced kungfu for less than six months would have difficulty defending themselves against opponents who practice other styles of kungfu or other martial arts. But if our students have practiced consistently for a year, they would be competent to defend against these opponents. After three years our students should have no difficulty handling their opponents.

This is so because kungfu skills and techniques are more complex than those of other martial arts, so it takes more time for our students to be familiar with them. But once they are skillful with kungfu techniqeus, they would find using kungfu in sparring or fighting more advantageous than using other martial arts.

Kungfu students of most other schools today use Boxing and Kick-Boxing in their sparring. Hence, for our purpose here, we can classify them as opponents of other martial arts.

This may be a main reason why you were not impressed with the students' performance in the videos. You forgot that many of them were beginners, and you might have unconsciously compared them with seasoned fighters.

Take, for example, the video clips shown on the webpage Testing the Shaolin Wahnam Sparring Methodology on Beginners. Except for Lucas and Adofo who had practiced a few years of Karate before, none of the participants had prior martial art experience (except Carlos and Rosa who also attended the Taijiquan course immediately before this). Yet, they could apply kungfu patterns for sparring after just three days of intensive training. I believe they could defend themselves adequately against opponents who had three days' training in any martial art.

Another reason for your doubt in the students' sparring was their lack of aggression and muscular tension, which might give you a false impression that they lacked power. But our students did not need aggressiveness and muscular tension to be powerful; they used internal force. Could they have internal force after just three days of training? They could, or else they would be unable to spar for about an hour without feeling tired.